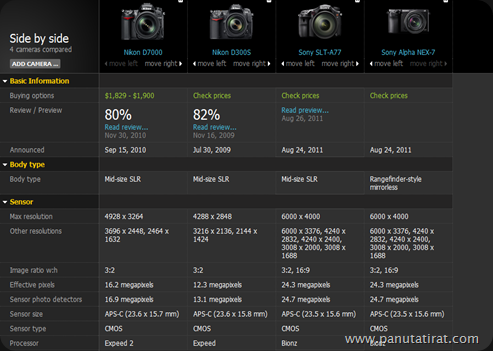 Three years ago with Matt’s arrival I got the green light to get a new camera, that resulted in the D90 which was later stolen, now the opportunity had arisen again (thanks Marcella :), but this time the decision isn’t so clear cut.

On the table are, SLT A77, D7000, D300s’ replacement and Nex7, don’t ask me why Canon isn’t on the list for a APS-C sensor based system, it hasn’t been on my list for quite some time now. Anyway, the indecisiveness is a real pain, back and forth like a four way see-saw in my mind, several times as soon as I was happy with my decision something caught my attention and the whole see-saw starts all over again.

The top of the list is A77, so why the see-saw? SLT system, losing a bit of light somehow bothers me, I know that it shouldn’t as the IQ should really be the final point, but now in choosing the lens apart from the focal length multiplier one will now have to calculate the real f. (minus half stop) for the aperture as well is just a little too much for my liking. Apart from that the real thing that bothers me is the pixel density, 24MP on an APS-C (affects low light performance) is way above my need.

So why is the A77 on top of my list? Every review on the net seems to indicate that the AF is insanely fast and accurate, this is so important to me, of course I am still waiting for my most trusted reviewer, dpreview. Apart from the AF, and on the same level of importance would be the low light performance, I would put myself in a ‘passionate’ amateur slot, so a bit of noise would be fine but again this is ranked very high on my list (many will now say why not go with the Nex5n? I already own an Nex5 and really wanting something with more manual control).

D7000 ranked second, but purely on an emotional side, this camera is over a year old, if I have to wait I would rather wait for the D300s’ replacement, but who wants to wait for something that could still be nothing but a drawing on some line manager’s desk.

I am a normal consumer, I am not taking some high roads here and will admit that silly little things that shouldn’t matter does matter, like in the example above buying a year old system is an obstacle in my mind. The other thing is new tech. I fully appreciate that new tech. does not mean better results (our individual ability is probably the most important variable here), but if there was a chance to try it, I would, did not hesitate to get the Nex5 as soon as it came out in Thailand.

Looks like the problem would be over with another site that I trust, sonyalpharumors, well, rumour is a rumour but this site is pretty much spot on most of the time. Looks like an off shoot of the A77 is in the pipeline if it turns out to be identical to the A77 but with lower MP, this would easily stop the see-sawing for good, even if I have to wait (and pine like crazy) for six months I would.

Nothing to do but wait and go back to enjoying the still very capable Nex5 :) haa haa haa, greed and gluttony is a terrible thing, tech. is more addictive than narcotics :) Now perish the thought of Nex 6.5, identical the Nex7 but with lower MP, I swear I just saw the see-saw creeping again… haa haa haa, only kidding.

Email ThisBlogThis!Share to TwitterShare to FacebookShare to Pinterest
by Panu Tatirat at 22:36
Labels: IT/Tech./Photo.