Please sir, not my zippo…

Can not believe in a few months I’ll reach the big 4-ooooohhhhhhhh, soon people will be standing up on buses and sky trains to offer me their seat, and not long after that it will probably be a nurse who feeds me all things puree (really looking forward to ‘spring roll’ puree, should be very intriguing).

A long time friend had just posted an unknown photo of me (which I never knew existed) onto FB, nothing embarrassing, in fact quite the opposite, it’s just me and another friend (Matt) sitting in the common room of our boarding house, I was in school uniform but without a tie and Matt was in his jeans. 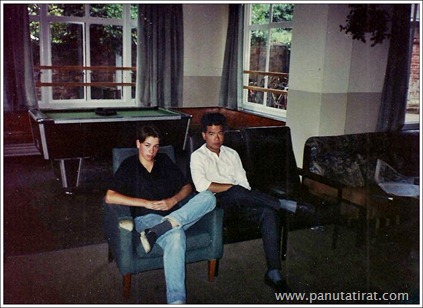 From this set up several scenarios emerge, it could have been after school and we were just chilling, it could have been Sunday morning and Matt was skiving off Chapel (this was unlikely because castration was the only punishment, and everyone got caught eventually, and I know for a fact that Matt now has a family with kid(s)). Or was I in trouble and had just came off detention, there is a strong possibility here as both of us looked pissed off at something or rather (or was it during exam time, the list is endless).

As I am now approaching 4-oooooohhhhh nooooooo, afar memories are fading fast, but to see a picture of Matt and him not smiling is just plain weird. Matt was (and probably still is) always smiling.


The clearest memory I have was when we decided to have a smoke but couldn’t be bothered to go to the usual hideout, as it was a dark autumn day, the sun had already said its goodbye, the air was calm but crispy cold with light rain, so we took our chances and decided to have a fag right in the small garden at the back of our boarding house, what a mistake that was.

When I say small garden, I mean very small, against the back wall there was a kind of a shrub that was big enough (if you squeeze hard) for a couple of teenagers to hide under, so there we were Matt and I in a kind of an unheard of yoga position and puffing away like a couple nuclear power stations.

Here is a really simple physic lesson, smoke do not sink to the ground it floats, through the shrub it went and into plain sight of any passer by, and of course due to sod’s law the first person to walk by was our house master (a wonderful and kind man, unless he caught you smoking right on the school’s grounds).

Don’t remember much after that, we certainly weren’t the first kids he had ever caught smoking and we certainly won’t be the last, all I remembered was standing in the hall way in this house and got a good bolloc#ing, I think he also confiscated my pride and joy, a shiny silver zippo and 20 Silk Cuts (and I can’t even remember if he ever gave it back or not, he probably did, he really was the best) Oh happy days :)

Email ThisBlogThis!Share to TwitterShare to FacebookShare to Pinterest
by Panu Tatirat at 14:32
Labels: England, Friends, School