The flooding of Thailand 2011.

For the past couple of months Thailand have been suffering from a terrible flood, we have seen its devastation slowly coming from the North affecting millions of people along the way, in Ayutthaya the flood have been reported at three to four metres deep!

As of today it is now knocking gently on Bangkok’s door. Bang Yai has just been hit and that isn’t that far from our home in the out skirt of the city, on the news we see homes literally being drown, the ground floor have totally disappeared under the water.

The next couple of days will be critical for Bangkok, there are whispers that the surround provinces are suffering more than it should because Bangkok is being protected. The major river of our country is Chao Phraya River and it runs right through Bangkok, but because Bangkok is the capital city ‘they’ have limited the flow of the water so that it goes around Bangkok rather than through it, meaning the surrounding provinces have to suffer from the flood longer than they should. Of course there is no way to validate this claim, just only that Bangkok is still dry while the other provinces are drowning.

The headlines are saying, “Nearly 270 dead, 8 million affected, and over 3 Billion USD worth of damages” and the ending is nowhere in sight. Several industrial estates have been totally wiped out, my thought was not only for the people who was suffering, but looking to the future, who will invest in Thailand now? Without jobs the future beyond this flood looks so much bleaker. 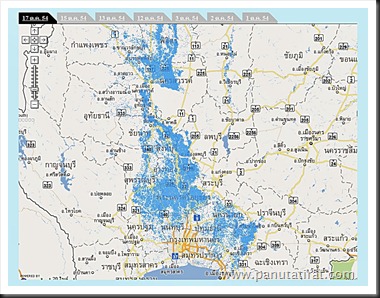 Here is a picture of the affected area, those blue patches are certainly not lakes just area that are being affected by this flood.

This map was updated on the 17th of October 2011, it is coming to Bangkok, the general feeling is that the authority may not be able to stop the water entering Bangkok, so people are preparing. Tesco, Big C and others superstores’ shelves are empty, cars are being moved up high, people are moving their ground floors belongings to the second floor.

This is a tough time for most, lets hope it subsides soon.

Email ThisBlogThis!Share to TwitterShare to FacebookShare to Pinterest
by Panu Tatirat at 17:23
Labels: Life, Thailand/BKK, Unforseenable