Building a PC? May be you should visit HW Leaderboard 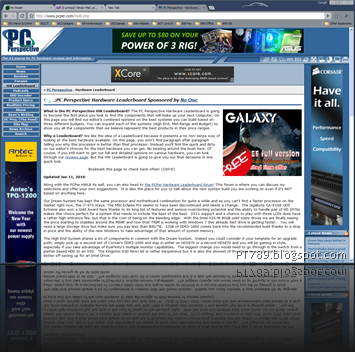 Like many, I’ve been religiously following various podcasts for a couple of years now, one of my favourite is TWIT (This week in Tech), under the same independent private organisation there are several others podcasts, the one I am also following is ‘Windows Weekly’.

One of the newest one that popped up was ‘This Week in Computer Hardware’ (TWiCH) which really hit the spot for me. This then lead me to www.pcper.com (PC Perspective), they also have their own podcast (a more in depth version of TWiCH).

In building a PC, one of the most tiring phase that I had to go through was to choose all of the components. Putting together my current PC (it was my first (over 5 years ago)) from zero to installing the OS took around 5 hours (with severe hangover and had no experience, so I was being stupidly over careful on everything).

Through listening to the podcast, I was pointed to ‘HW Leaderboard’… simply they give you 4 lists of different specs of PC that you could put together… You may not agree with all of their choices, but I think this is one of a good place to catch up on the current tech. that one should consider in building a new PC, especially when you’ve been away from the like I have. :)

Email ThisBlogThis!Share to TwitterShare to FacebookShare to Pinterest
by Panu Tatirat at 13:03
Labels: IT/Tech./Photo.

In just four months you'll be 2 years old, we were warned about this, they call it "Terrible 2", as we get closer and closer to the fifth of May, and as each day passes we are beginning to understand this terrible two theory first hand :)

To be honest, you are not terrible :) but where as before we can just pull you here and push you there without even a squeak, now that you are older, you are starting to have a clearer idea on what you want and most of the time what you want is exactly the opposite to what is good for you, putting fingers into a live plug socket is so not 'good' for you.

Putting you into a car seat is like trying the catch an eel after our hands had been dipped in cooking oil, not easy is the point I am trying to get to. The only thing that will keep you still is the iPhone/iPod Touch, either of the two would do just nicely :)

So anytime we want you to remain still for a few minutes, up pop the iPod Touch, we have been avoiding giving you the iPhone because the last time you had somehow managed to call my father :)

Last week, your mother had left  you alone for a few second with the iPod Touch, while she went into the kitchen and I was upstairs… By the time I came down again I saw that the iPodT  was sitting on the desk, so naturally I picked it up, inserted the headphones and pressed the ‘home’ button… :)

A clear liquid kept coming out from behind the main button each time it was pressed… it didn’t need Sherlock Holmes and Dr. Watson to tell me what liquid that was… Saliva :) After a closer inspection I can see small dint around the button… ‘tooth mark’… :)

4 days later, and the button is still not working properly, sometime it works but most of the time pressing the button does nothing :) I am hoping as soon as the saliva had evaporated then it will go back to normal… still hoping :) For some strange reason it makes me smile every time I imagine you sucking and biting the iPodT… I wished I had taken a picture of it :)

Email ThisBlogThis!Share to TwitterShare to FacebookShare to Pinterest
by Panu Tatirat at 16:39
Labels: Baby 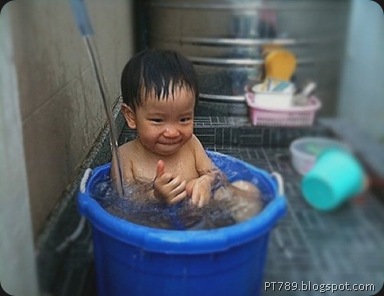 Your mother took this photo one afternoon while I was at work, and to have this popped up in MMS was fantastic, just because I knew how much you were enjoying yourself.

It is probably true that all babies love water, but you are on the far end of a bell curve, using the word ‘love’ to describe how much you enjoy your bucket full of H2O is still an understatement :)

I have no idea how much time or what trickery your mother used to get you out of this blue bucket, but I am sure it was probably easier to get a bull elephant to float on a Lilly pad.

Email ThisBlogThis!Share to TwitterShare to FacebookShare to Pinterest
by Panu Tatirat at 23:08
Labels: Baby