This was the final weekend before the 'Songkran' festival, (aka Thai New Year), you'll grow up to realise at this time of year I act like a dog suffering from an advance case of rabies, totally hydrophobic!

Songkran festival falls when it is supposed to be the hottest time of the year, so it kind of make sense that Songkran is when there is a three days nationwide water fight :) For the nine to fivers, this year Songkran falls on Tuesday to Thursday, which is a boon, so many have taken leave on the two remaining working days, making it  nine days of blissful nothingness. 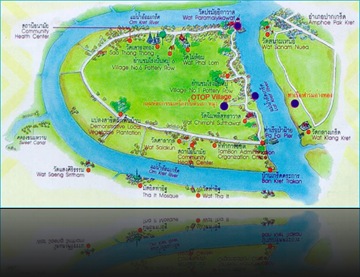 So going back to this past weekend, Sunday being another scorching day meaning we couldn't let you outside until the late afternoon, your mother came up with another fantastic idea (no sarcasm here); we left the house around five to go to Kred Island, which is an island in the middle of Chao Phraya river (to the north-west of Bangkok), just found out that it became an island because King Hua-Thai-Sra (1722 AD), decided to create a short cut, the command was to dig a short cut of 266.52 cm deep, 6 metres wide and a bit over 1,160 metres in length. The water will find the easiest path, and it was certainly true in this case, eventually the short cut became wider and deeper until it became a full fledge river :) 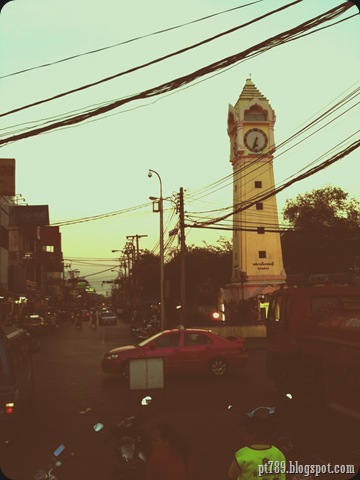 Of course with all that history and things to see and do, we got there at the wrong blooming time! Apparently the time to visit Koa Kred (a direct translation is Island Kred) is in the morning, apart from that it looks like we’ve arrived at the wrong pier as well :) with absolutely no idea, we were just following the street signs that said 'Tar Nam Non' (Waterside Pier Non (Non is short for Non-tha-buri, which is the district’s name), with hindsight we should have gone to either the Wat Sa-nam Nuae pier or the Wat Klang Kred Pier (we were only about 5 Kms off :)

I think one of the reason we were so fixed on Ta Nam Non is because this is one of the most well known riverside pier (because it has a market), thinking that is was in the right district, it must be close to Kred Island, how wrong were we? :) Getting to Ta Nam Non was a singe, there were signs everywhere, but once there getting a parking space was going to be more difficult than swimming to Atlantis. By faith or destiny I did what I had thought it was the logical thing to do, I had driven right up to the pier, and again that was the absolutely wrong thing to do, along the pier were several food hawkers, and just enough room for one car to pass at a time, there was nothing we could do. We were forced to drive along small allies but there was a pickup truck in front of us, with my spidy sense I decided to follow it. The pickup suddenly turned left through a small gate… and so did we, well that turned out to be the best move of the evening, suddenly we were in the parking area of a local school :) with loads of empty spaces.

Of course we only realised we were in a totally wrong place, when we were at the pier, a couple of people there were very nice and helpful during all the while we were debating on what to do, there were a couple of choices, either to call it quit and just take a walk in the market or just jump into the boat and take a quick ride down the river. 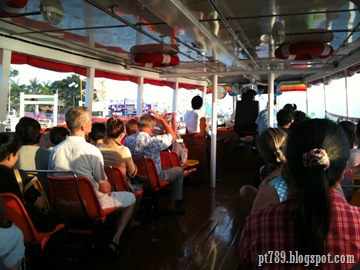 Since we were already at the pier, plus there was a boat already loading up the passengers, we decided to take you on to the boat, at thirteen baths each (for the whole route) it was fantastic, however as we stepped on to the boat you suddenly got quieter and quieter.

After some minutes, the engine started to scream, and we were off, you didn’t make a sound :) but instead held on tightly on the rail in front of you :) looking left and right.

It was just boring sitting on the plastic seat, and the view was limited, so I decided to take you to the rear of the boat so that you can have a proper view of the river :) 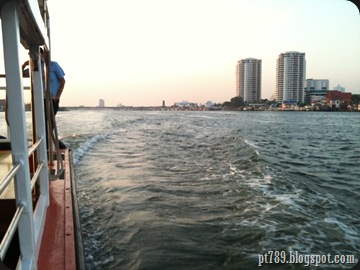 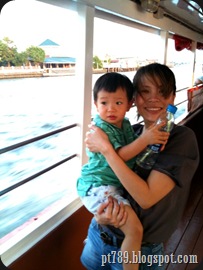 We decided to get off a couple of stops down the river (just like getting off a bus but on water).

We had to go back because your mother wanted to have a wander around the market, and it was already late.


On the boat back you were in a totally different mood, laughing, screaming and having such a fun time all the other commuters were looking at you, this time I could not take you to the rear of the boat, on this one the engine was much louder, much, much louder.

As it turned out the market was a bit of a let down, may be we went to the wrong section, but soon I got bored, the heat was almost unbearable and being squeezed between a gazillion people was just too much, so I left your mother and took you to have a wander around the school (where we have parked our car earlier).

Looks like Kred Island would have to wait just a bit longer :)

Email ThisBlogThis!Share to TwitterShare to FacebookShare to Pinterest
by Panu Tatirat at 14:09
Labels: Baby, Thailand/BKK