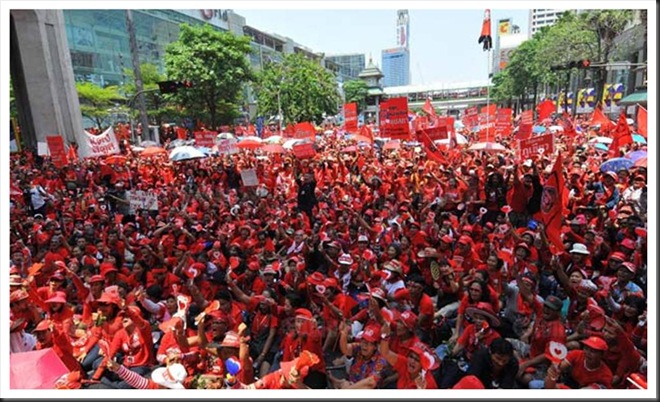 For the past couple of weeks the red shirts have upped their pressure on the Government, by taking over the heart of Shopping/Retail area in Bangkok, they have taken over the Ratchaprasong (Ratch-cha-pra-song') area, immediate rendering the most popular shopping areas out of bound by choice to the public, whether it be Siam Paragon, Central World, Siam Square, Siam Discovery, Central Chidlom and many many more, and if you know Bangkok, these are by far the most popular and the heart of retail in Thailand.

Only this morning the police/army are planning to move in and disband the red shirts… good luck to them, the policy is for the authority not to have any weapons, in a way that is a great idea, at least the chance shooting through heated emotions would not happen, but how is it going to work?

Next week is Songkran holiday (Thai New Year), and it is unlikely that this would end by then…

Email ThisBlogThis!Share to TwitterShare to FacebookShare to Pinterest
by Panu Tatirat at 13:59
Labels: Thailand/BKK