How very congenial of you

“Chakri Day is observed on April 6 to commemorate the contribution of the kings of Chakri dynasty, who have been ruling Thailand since 1782. The day is a medium for the faithful people of Thailand to express their love and reverence to the mighty kings”

Just like the past few weeks, the weather was absolutely scorching, we only took you outside to play with the water hose in the early morning and after your afternoon nap we (your mother to be more precise) decided to go to Amphawa floating market (for great photos and information please visit www.amphawafloatingmarket.com)

Unlike the other water market, where one has to be up well before the cockcrow because most of the action happens in the very early morning; Amphawa is a night water market, starting from around fifteen hundred to about twenty hundred, one of its many attractions is to take a boat ride and see the firefly (unfortunately we didn’t have time for it).

Though many visitors come to Amphawa for the food (fantastic) sold from boats and eaten by sitting on the steps by the river, I personally do prefer the ambience of the place more; there is a make shift temple and museum to the rear of the market, the houses that lined up along side the river have been kept in their old style with wooden doors and wood interior, so it was not surprising to see that many of the houses have been turned into a home stay hotel. 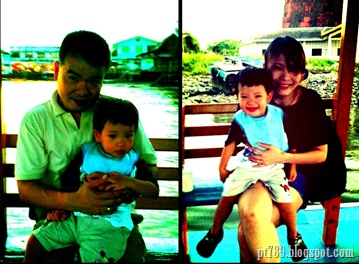 We left the house around seventeen hundred, and only took around an hour for us to arrive at Amphawa (sixty five Kms), the sun was slowly retiring to bed, but the searing heat was still present in full. The last time we were here you were travelling first class, in your mother’s tummy :), because this wasn’t our first visit so we kind of knew where we wanted to take you.

Apart from the food sold from boats, there were also many colourful food hawkers along the streets, all the while you were with me (too many people to let you walk alone), so your mother was free to eat this and try that while she wander through the streets.

We decided to take you on the river crossing ferry (ferry is a bit of an overkill, it was a large boat that can seat around thirty to forty people), you showed a bit of apprehension at first, but settled down quite quickly, after this brief ride it was time to go home. 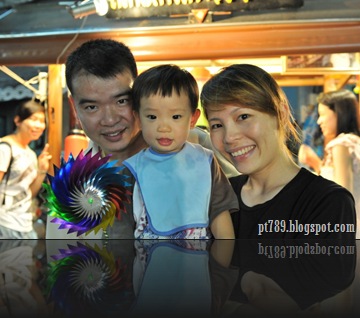 Whilst walking back to the car, and making our way through the small crowd I came across this person that was extremely familiar, but to be honest, have absolutely no clue who he was; he saw me too, obviously I was familiar to him as well, because we greeted each other at the same time, we got into a conversation about Amphawa and his day trip, after about five minutes or so he took some pictures of us (Nikon D300, I was extremely jealous) and we said our goodbyes.

I was still wondering who he was during the hour long drive back home, however I was 100% sure that we work in the same company but in a different division, and the next day have proved I was right when he was very kind enough to send me the pictures that he had taken over the email.

It is rare to have a picture of the three of us together, so this photo is very precious to both your mother and me.

Email ThisBlogThis!Share to TwitterShare to FacebookShare to Pinterest
by Panu Tatirat at 13:48
Labels: Thailand/BKK, Travel