iPad2, what a time waster (in a good way)

I am sure millions and millions of iPad2 users are totally productive, creative, original and even innovative using the darn thing. It arrived in the mail today (got it for the wife), after setting it all up with Gio’s various email accounts, filled it up with all of the modern lifestyle necessity, aka, Facebook, Twitter, Foursquare, a good selection of games and other apps (mostly not native to iPad2). I found myself fiddling with it for a few minutes, then putting it aside like a yesterday’s toy. 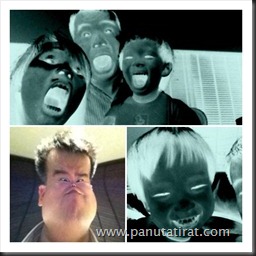 Of course as soon as our Matt came, it was a totally different story, he was ‘over the flippin moon’ is an understatement of the century, I ended up having loads of laugh with it as well.

It was ‘SO’ nice to have all the extra real estate (especially for email and web), the native ipad2 apps look great, for me this device will play more of a consumption role rather than creation role.

Was it worth it getting the top model, perhaps not, but the original plan was to load it up with all of Matt’s vdos so the 64 option at that time was even too small, but right now can not be arsed to rip the dvd into mp4 just yet.

It would be fantastic to have one of these in my hands during one of the numerous ‘waste of time’ meeting, but apart from that I can’t see myself fighting the wife just to take turn on it, let alone getting another one for yours truly. Now, my iPhone is a different story, no one can tear that away even from my cold dead hand, of course unless they were going to swap it with a Samsung Galaxy S II :)

Email ThisBlogThis!Share to TwitterShare to FacebookShare to Pinterest
by Panu Tatirat at 23:52
Labels: IT/Tech./Photo.