What was I thinking wearing a white shirt? 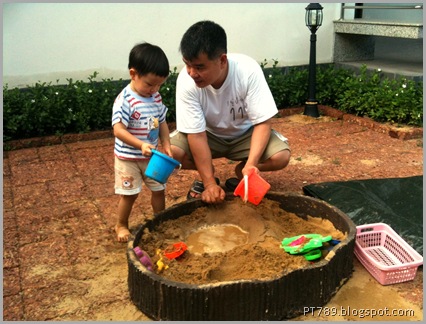 With all of the social unrests going on in Thailand at the moment, people are being shot, wounded and killed almost daily. The morning news has nothing but burning tyres, sounds of firing bullets, now and then I would get a glimpse of my office building surrounded by soldiers and barricades,  the area is no longer recognisable, and this is where I spend all weekdays walking up and down, dashing here and there mostly trying to get to the meeting on time :)

It got really bad since this past Monday, and since then we have been told to stay at home, we have tried our best to keep you entertained and challenged so that you won’t get bored.

Yesterday, we decided to stay home in the afternoon, so it was only logical for you to have another dig at your new sand pit :) with hind sight I wished I did not wear that brand new white shirt that was given to me as a present from a colleague. Oh yes, it looks nice and pristine right now, but gives it another 5 minutes, just right after you had decided to pour wet sand on yourself and thought that daddy should be the same colour as me!

At first the sand was dry and looking very harmless, but soon you found it uninteresting to just dig around, being a fantastic dad that I am :), I had decided to give you a couple of ‘tiny’ buckets of water (see pic., note blue and orange bucket)… Well talking about letting the cat out of the bag, I had originally thought, ‘all he needed was 2 small buckets of water, just to get the sand damp enough to make it sculpt-able’, but of course I had forgotten that you are hopelessly addicted to water, 2 buckets became uncountable buckets of water… and let the sand shower begins :)

That shirt is no longer white, and I now have a bona fide case of eremikophobia, thanks :)

Email ThisBlogThis!Share to TwitterShare to FacebookShare to Pinterest
by Panu Tatirat at 00:09
Labels: Baby, Thailand/BKK