Your mother, Chat (or uncle Chat to you) and I, all met up while we were working at BMW (my first job in 1999 @ BMW Thailand), it must have been because we were individually running on the same wavelength because we got on really well from the first instance we met, as you know (of course) I ended up marrying your mother and Chat was the best man at our wedding.

As we all have our own paths to take (or not to take), and to leave this long story to another day, uncle Chat now works on the edge of Rayong Province and lives in Pattaya (may I say Las Vegas of Thailand? (but no gambling (officially))).

Just as a guess, he must have been working here for a couple of years now, and so it comes with no surprises when he told us he had just bought a house and wanted us to come and take a look, not until last Saturday (19th) that we had an opportunity to go, this would also kill 2 birds with one huge stone.

Another friend from BMW is retiring, he is an expat (Uncle David from the UK), so he and a few colleagues had decided to have a get together in Pattaya, so just like the A-Team, "love it when the plan comes together" (I am sure you would have no idea what the 'A-Team' is... just go and Wiki/Google it).

I was determined to break our world record this time, 10:45 is the record for leaving the house, I was convinced we could at least shave off another 15 minutes or so, but this time it would be difficult because your mother wanted to make your lunch and take it along in this 'inspector Gadget' type flask that was given to us by my mother (she spares no expenses when it comes to you), this flask comes with a 3 page instruction manual, do you get my point? (as lunch goes, our previous trip to Lopburi was a disaster).

Anyhow, I was still determined, on the night before I had asked your mother to prepare all of the ingredients and put it in the fridge; all that could be done the night before was done, set up car seat, pack the cot, folded the pram, pack your day bag and other million things.

10:45 was stamped in my mind, and the clock was ticking... 06:00 was the time now, I had the list and a deadline to match; prepare your lunch (all ingredients in the clay pot for a slow simmer), make your breakfast (boil the brown rice, and defrost the chicken and liver), make your milk then take it up to you (you were still sleeping), back down to wash the majestic flask, move all things to the front of the house, back out the car for easy loading... and from the corner of my eyes, the clock had sneakily crept passed 07:00.

Making your breakfast, feeding you and bathing you was going to take the majority of the time, but your mother had that down to a fine art, and packing your lunch was left to P'Pui (our house keeper); all was set, by my calculation we should be able to leave the house at around 10:00, a whole 45 minutes quicker than last time... That was until your mother had to do some urgent office work... *!@#. In short all we could do was to only matched the record of 10:45.

Again, on the previous night all the route was programmed into the GPS, so this time (and probably for the first time ever) we were not going to get lost (actually, when I say we, I should have said 'I').

Just like every time, not long after we had set off, you felt into a peaceful sleep, your mother wasn't feeling too well (hay fever), and I was still a little miffed about not beating the record (there will be many more chances to beat it), about an hour on the road we had to stopped off and get some petrol, where you promptly woke up.

Very uneventfully, we got to Pattaya in about an hour and a half, we called Uncle Chat as soon as we arrived in Pattaya, the original plan was to meet up with the BMW gang at a restaurant, however they had decided to go somewhere else for lunch and Uncle Chat wasn't going with them.

By faith or destiny, Uncle Chat was very close by when we called and so we decided to meet up before heading to his new home (his Mother was also in town putting the final touches to the garden). 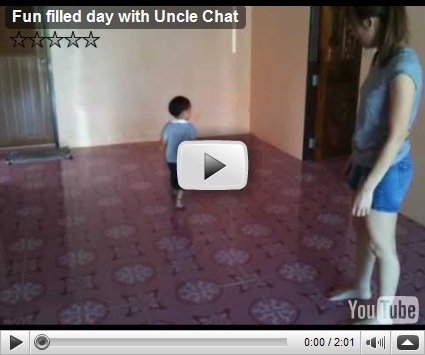 Talking about enjoying yourself, you must also be on the same wavelength as Uncle Chat, because you got on too well :) running and laughing all the time we were there, you were like roadrunner high on concentrated caffeine. Stopping over at Uncle Chat gave us a chance (and the room) to give you lunch, running and eating seemed to be the quickest way to feed you :)

The flask did its job perfectly, the food was still very hot and that is the way you enjoy it best. After lunch we tried to make you sleep, but that was out of the question, may be it was the different surrounding with new people or something, but sleeping was the last thing on your mind.

By the time 16:00 came, it was time to set out again to meet up with the rest of BMW gang.

Uncle Chat had arranged for the BMW gang to stay in a small resort not too far away, it was quite exciting as we have not seen them for a while now. There was a lot of catching up to do, and caught up we certainly did :) We didn't paint the town red, just sat and talked and drank :)

Everyone was fine and dandy, some of our friends had brought their children along, and we were surprised on how much they have grown (don't we just sound old?) :)

We stuck to the plan, and said our good byes at around 18:30 just in time they were heading out to dinner (perfect timing), the drive home was again very uneventful, because you hadn't slept all day, the comfortable car seat was just too much for you, in no time you were out like Christmas ligths, 12th day after Christmas :)

By the way next trip we are planning to go to Ratchburi (not too far away this time) :)

Email ThisBlogThis!Share to TwitterShare to FacebookShare to Pinterest
by Panu Tatirat at 16:35
Labels: Baby, Travel