‘The South Association’ or ‘People of the South Association’ is very close to our home (about 1 Km on foot), it is a circular building (a somewhat of a landmark in the area, being especially useful when giving direction to the taxis) with expansive piece of land to the rear of the building. Once a year they organize a carnival type event, where they promote various highlights from the South. There are plenty of Southern Foods, Games, Live Shows and etc. 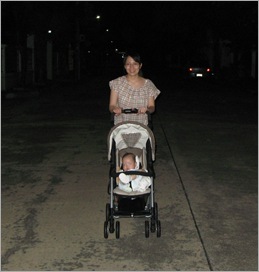 Because last Saturday’s trip went so well, we have decided to take you to this carnival, walking was our mode of transportation, not because we wanted the fresh air or anything, basically because finding a parking space would have been close to impossible. So off we went, it must have been around 18:35, the sky was dark but there was no sign of rain, and again the wind was nice and cool.

Walking with the pram together with all of the accessories and on crazy pavement have certainly slowed us down, it took us around 25 minutes to cover the 1,000 metres (measured on Google Map), the wind was picking up and the weather certainly looked a little more dodgy. 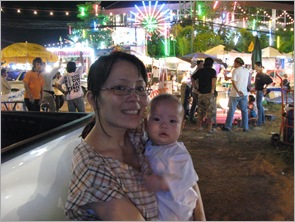 As expected the place was jam packed with people, you looked a little startled with all the loud sounds from speakers not to mentioned the different colour lights and the mass of people. Your mother ended up having to carry you around while I tracked behind with the pram, umbrella, and a million other things we thought you may need (I was carrying virtually  half of our net worth). As I am new to this pram thing, I kept running over your 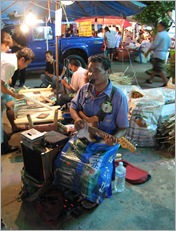 mother’s foot (from behind, only a couple of times too many), so she was more than p*ssed off at me but she couldn’t do anything about it because you were with her… (thanks). 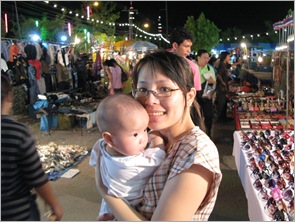 We tried to get to the main tent, must admit it I was the first one to give up, I told your mother that I was going to wait while she went with you to look around (and undoubtedly to buy things…), but with your stuff hanging from every nooks of all of my body parts, it would have been too difficult for me to push my way through the crowd. So I stood while your mother walked away into the crowd… She must have taken about 3 steps then came to a wall of people going in every other direction but the one that your mother wanted to go.


Very soon after your mother gave up too, it would have been stupid to try to go on further, so she turned around looked at me, and without a word spoken we started to head back the way we came. 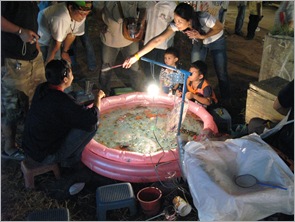 There was another area, just across the side road with a lot less people so we decided to go there instead. Of course it attracted less people for a reason (no food), it was full of typical carnival games with plenty of people shouting from the huge speakers and brightly coloured neon lights trying to deafen and blind passer by all at the same time. You certainly had some ‘WTF is going on?’ look on your face, but you didn’t cry, so we assumed that you were enjoying the new experiences or that you had a mild shock to your system, as it was certainly much different than our quite house. 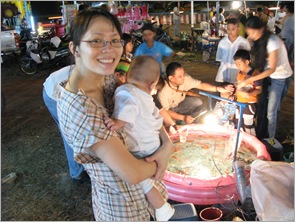 After a quick once around we began to head back home, this decision had proven to safe us all… Again the pace was slow heading back, by the time we were about four hundred metres away, your mother felt a small droplet of water on her face, she looked at me and at that moment there was a huge lightning in the sky… It didn’t matter that our umbrella was the size of a small car, there was no way we could protect you from the rain in the monsoon season (the heavy downpour could have easily drown a fish with a scuba kit).


We started running, like in some B grade movie, your mother was pushing the pram while I carried everything else and lumbering just a little behind. It was spattering now, our pace picked up slightly, with two hundred metres left I broke away from your mother as I needed to open the doors so that you could have a quick entrance. 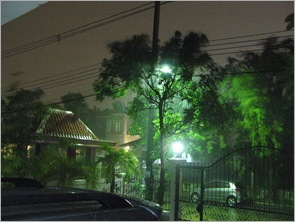 I was waiting by the main gate watching your mother pushing your ever closer, the rain was still spattering but the lightning was definitely getting angrier, you arrived at the main gate, I picked up the pram hauling it over the small railing at the bottom of the metal main gate door, pushed you up the small driveway then hauling it again up the 3 steps, then through another door of the house, we were now safe, literally a minute after we got through the last door the sky let everything loose, just like a bad case of a dodgy vindaloo… We have never laughed so much, it was such a close shave.

My parents and your mother’s parents would have killed us if they have found this out, so we have decided to keep this a secret just between the three of us…

Email ThisBlogThis!Share to TwitterShare to FacebookShare to Pinterest
by Panu Tatirat at 16:17
Labels: Baby