Not such a wonderful beginning to the new month, this morning we found some small red patches on your body, of course with me being a professor of medicine (not), I had assumed it was due to the heat, so we went through our normal routine, however we had to be out of the house earlier than usual as your mother had an early meeting.

At around 10 am, my mother called… when I saw ‘mother’ flashing across my Nokia, my heart sank, as she never usually contact me unless something was wrong. She sounded worried as the red patches have now spread throughout your body with most of it on your thighs. Initially I had thought that it was only a nappy rash (see, my experience in high medicine shines through again), but then soon realised that it was all over your body thus it could not have been.

Like a re-run of a few days ago, soon I was walking out of the office then jumped on the ‘(motor)bike taxi (30 baths)’, 5 minutes later I was waiting for my mother at the hospital. I got excited with every taxi that was passing by the hospital, this isn’t a fetish that I have, but because I was sure that it was you and my mother in the taxi. I was exhausted by the time you arrived, to my surprise my cousin (J-Na) had come too, I was glad for that. 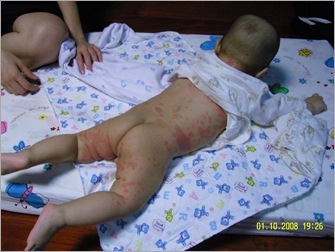 The first thing I did was to take a look at the rash that you have… was not a pretty sight, it had spread to cover most of your body. To cut the long story short, the Dr. said you had Urticaria (Lom-Pit in Thai) and the cause could be the medicine that you were currently taking for the swollen foot.

You will be taking Keflex (antibiotic) from now on (for the next 5 days), whereas before you were on penicillin based antibiotic. The red rashes could be a sign of you having an allergic reaction to the penicillin (your mother is also allergic to penicillin).

Personally I think the rash should be going away in a couple of days, but your swollen foot is what I am really worried about, it had been 8 days now, and it is still swollen (although it is very slowly getting better, can an insect bite take this long to heal?)… I was so worried, so after today’s visit to the hospital I went to the temple to make some merits for you.

I hope you get better soon.

Email ThisBlogThis!Share to TwitterShare to FacebookShare to Pinterest
by Panu Tatirat at 05:10
Labels: Baby