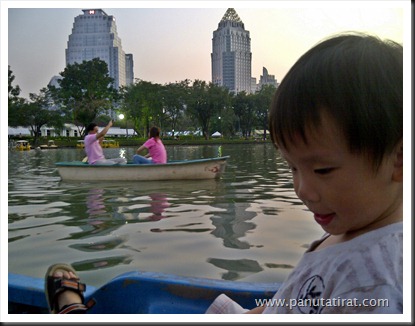 The photo was taken on the 5th of Dec. 11, aka Father’s day here in Thailand (King’s Birthday), being a National holiday I decided to take Matt out so that his mother could have some peace and quiet.

Decided to take him to Suanlum, but never intended for us to end up on a two seater speed boat, lol.

The engine of this fantastic speed boat was supposed to be 4 LP (Leg Power), but unfortunately due to the length of one pair of legs being rather short, the boat ended up with just the 2 LP, and truth be told this 2 LP engine was almost 40 years old so it was a real surprised that we made it all the way across the lake.

He had a great time (his first time), and kept spotting several turtles, I never knew there were so many ‘invisible’ turtles in this lake (probably the same clan as those infamous ninja turtles). My parents came to pick us up, coordinating over the phone for the precise location of where we were was a bit of a nightmare, only then to realised that the last time my parents came to the park was over twenty years ago :)

I wasn’t really prepared otherwise I would have taken a better camera, but the camera on the BB was not too bad, will try to get better shots the next time :)