As Big as a House (a slight exaggeration)

A friend of mine would have suffered from a heart attack if this thing came running. He/She was well hidden, but the sound of his/her footsteps gave its position away, I was actually on the third floor when I heard several footsteps on the ground floor, at first I'd thought it was a large dog that got loose and was ransacking our living room but it turned out to be something very different... 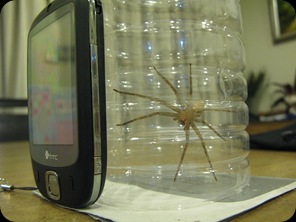 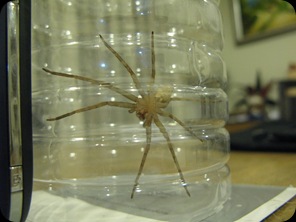 Seriously, when I caught this, I wondered if this was the thing that gave you your swollen foot a few weeks back.

We'll never know, but at least it is now out for the house (until it breaks our door down and crawls back to the bathroom, haa haa haa). 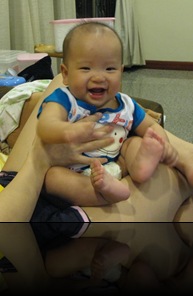 The natural milk stock is running low, so we have decided to use formula for one of your meal each day. There seem to be no issue from your point of view, it looks like you'll eat anything now a day. My mother have started to give your fish again in the morning, and you scoffed that down like there is no tomorrow, the only thing I think you don't care much for is Prune Juice... you should have seen your face... :)

We are so looking forward to the long weekend next week, much more so than before you arrived... we are still discussing on where to take you, it must be a day trip because we don't own a lorry (a lorry is the only thing large enough that will be able to carry all that you need, who could imagine a two foot nothing baby would need to have so much stuff... haa haa haa).

Email ThisBlogThis!Share to TwitterShare to FacebookShare to Pinterest
by Panu Tatirat at 07:27
Labels: Baby