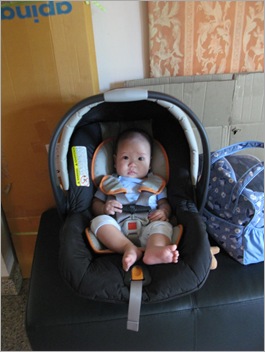 Your mother and I have been discussing this trip since last Friday, the only thing that would have stopped us going on this short trip was the rain, and it had been raining so much of late (in fact, it had been raining every morning and evening consistently for the past 2 weeks, and I am not talking about little drizzle like you get in England). The sky was getting darker and darker but it didn’t rain, by the time 5 O’clock came, it was positively sunny, so we decided to take our chances and in a rush, gathered everything together (this was my job… milk bottle, car seat, the ‘huge’ pram, umbrella… etc… etc…). 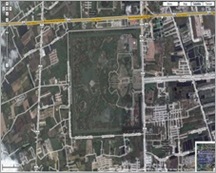 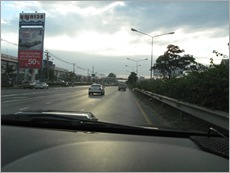 Phutthamonthon [1] (a Buddhist Park) is not too far from our house (on a good day, 20 minutes East by car), one of the highlight of this park (apart from the 52 ft. Buddha statue) are the fishes, it is quite a spectacle to have thousands of fishes coming up to you and taking food from your hand, your grandfather prefers to throw in a real big chunk of bread and see them taking turn (gladiator style) to chomp up the bread. 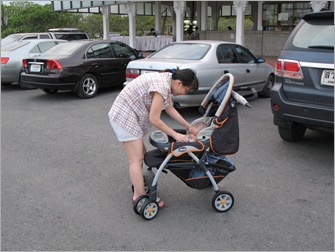 Unfortunately, we had left the house rather late, and after an uneventful drive it must have been around 17:45 when we arrived at Phutthamonthon, so instead of going to feed the fishes we have decided to go for a short walk instead.

It was fantastic to see you smile and enjoying the new surrounding as Phutthamonthon is only ~160,000 times larger than our back garden (at 2500 rais = 4 million m2), judging by the smile on your face, I think you must have really enjoyed the open spaces and especially the nature. It was so refreshing for us to be out in the open area while the sun was setting and being caressed by the light breeze. 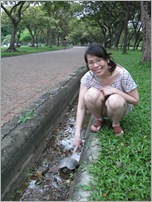 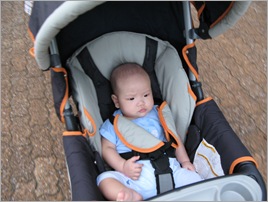 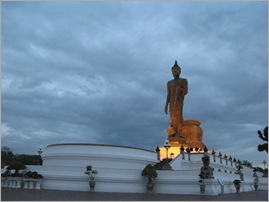 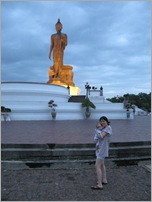 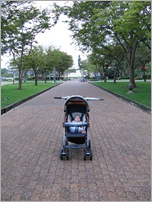 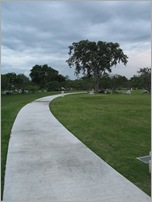 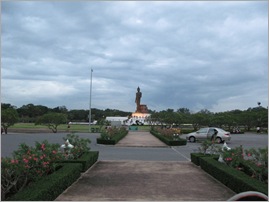 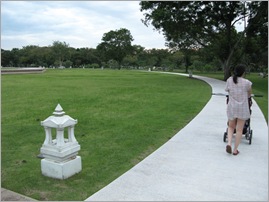 As they say, time passes quickly when you are having fun, soon it was getting dark and it was time to come home, and this was when it happened. Your teddy was in a bag, which I had placed at the bottom of your pram, the pram had to be folded to get it into the car… but I had forgotten to remove the bag… your teddy felt onto the ground… because you enjoy sucking on your teddy so much… I had asked your teddy to jump into the bucket for a quick wash… 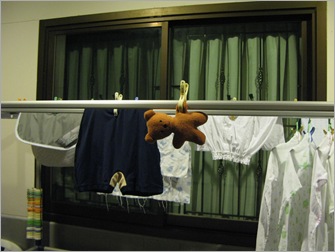 I am so sorry, I didn’t know that your teddy couldn’t swim, to my knowledge all teddies have to pass their basic swimming proficiency course before taking on a job of being a little boy/girl side kick. By the time I got back to him, he was already floating and lifeless, faced down in a bucket full of water… all I could do was to hang him out to dry and hope that he will come back to life once all the water have gone…

3 days later… you’ll be glad to know that he had survived the drowning, although his squeaky thing is still sounds like it is full of water… give it a few more days I am sure he will be back to his squeaky self…

[1] Wikipedia: Phutthamonthon (Thai: พุทธมณฑล, also often called Buddha Monthon) is a Buddhist park in the Phutthamonthon district, Nakhon Pathom Province of Thailand, west of Bangkok. It is highlighted by a 15.87 m (52 ft) high Buddha statue (given the name Phra Si Sakkaya Thotsaphonlayan Prathan Phutthamonthon Suthat by King Bhumibol Adulyadej, it is located at the centre of the park), which is considered to be the highest free-standing Buddha statue of the world.

The park was created in 1957 (which was the year 2500 in the Thai Buddhist Era) on the basis of an idea of Thailand's Prime Minister, Phibunsongkhram. The park covers an area of about 400 hectares, which in traditional Thai units is 2500 rai. Construction started on July 29, 1955, and the park was inaugurated on the Vaisakh Bucha day (May 13) in 1957.

Email ThisBlogThis!Share to TwitterShare to FacebookShare to Pinterest
by Panu Tatirat at 16:19
Labels: Baby