Has the fat lady sung?

Hopefully, It comes in threes, well you had the high temperature (39.7C), then as soon as that was over you developed a terrible allergic reaction to something (still recovering), and then last last Monday you had to be admitted into the hospital, because from one am to five am (Monday), you were vomiting on the hour every hour, and by seven you were definitely not yourself, probably tired from all the strain. 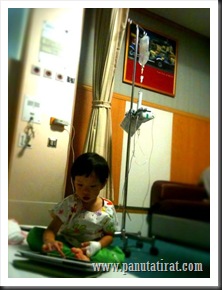 Enough was enough, your mother wasn’t getting any rest and nor were you, and to have three things running one after another was just too much, so the idea to admit you really helped us on so many level.

The worst thing was when the nurses had to put in the intravenous line, luckily I was not there :)

You came out yesterday, and today we decided to let you go to Noddy for the 3 hours (in the morning), perhaps it was too soon, but after your afternoon rest you were as right as rain… like I said, I hope the fat lady had already sung her final tune with you :)

Email ThisBlogThis!Share to TwitterShare to FacebookShare to Pinterest
by Panu Tatirat at 17:43
Labels: Baby, Family, Unforseenable