My 5 years old Fortuner have spent more time standing still than on the road since we’ve moved into the city, and with the new job with a position car meaning the Fortuner has even less of a chance to run wildly on the open roads.

Anyway, it is well known that Fortuner is a soft target for spare tyre theft, as it hangs (in plain sight) under the boot of the vehicle. This past Sunday we drove the Fortuner to our home at the out skirt of the city, Gio noticed there was a unsymmetrical trapezium shape hole in the rear bumper... WTF, was my first thought, how on earth did that happen, even upon closer inspection I was still baffled on how it could have happened and not for a second did I realised that the spare had gone! 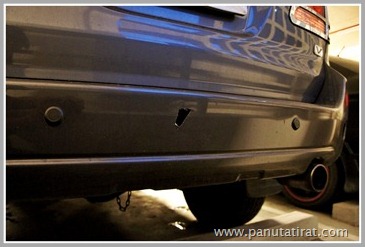 Did I back the car into a horizontal ‘this is Spata’ spear? Or was it just a simple case of a vandalisation? Anyway, it quickly went to the back of my mind and didn’t think much of it, and at around lunch time we drove back to the condo in the city.

In the same afternoon I took a taxi to take Matt to his Little Gym class, and on the way back as the taxi was stopping at the condo there was another Fortuner right in front of us, naturally I was focusing on his rear bumper... Then it hits me literally like a bolt of lightening. “Oh %^#& someone stolen my spare tyre”!


There was no anger, just very annoyed that the thief actually drove through the security guards, and had the time to remove the spare tyre without being spotted by the security guards. How did I know that it happened in the parking lot? Gio went down to look more closely and found the missing part of the rear bumper, it was still there in my parking spot. 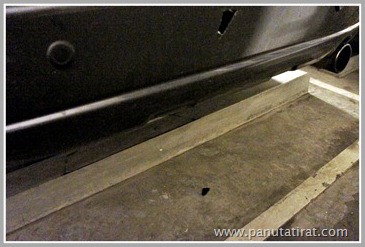 After Gio found the plastic part, she went to verbally complaint to the management, they sat down and watched the CCTV feed, however the CCTV proved little use as they can only go back one week.

The day after I had to go to the police to log the case (this is a normal procedure in Thailand), not hoping for any compensation but will submit a letter to the condo’s management, just to let them know how disappointed we are. I was later told that another Fortuner also had his spare tyre stolen exactly in the same manner and probably at the same time as mine.

Email ThisBlogThis!Share to TwitterShare to FacebookShare to Pinterest
by Panu Tatirat at 17:20
Labels: Annoying, Event, Unforseenable