Oh what an interesting weekend this will be :)

It all started with such a great plan, Saturday we were going to take you to your first stage show, ‘Mickey Mouse Show’ at Siam Paragon and Sunday would be another trip with your grandparents, so what happened? Life threw you, your first curve ball :)

Friday morning, you woke up with a slight temperature (didn’t think too much of it at that time), to keep you busy we decided to drop you off at Brain school just for the morning. At the same time, our house keeper turned up looking like death on a stick, she was obviously very ill. So while you and your mother were out, your mother decided to call the house keeper and told her to go home.

By the time you came back your temperature was a little bit higher but nothing to cause any alarm (still in the mid 37), so after lunch you went for your afternoon nap… then everything started heading south, you woke up burning and complaining of feeling cold… It must have been faith, your aunty turned up just as you were getting ready to go to the hospital, your mother did need a helping hand to get you ready. 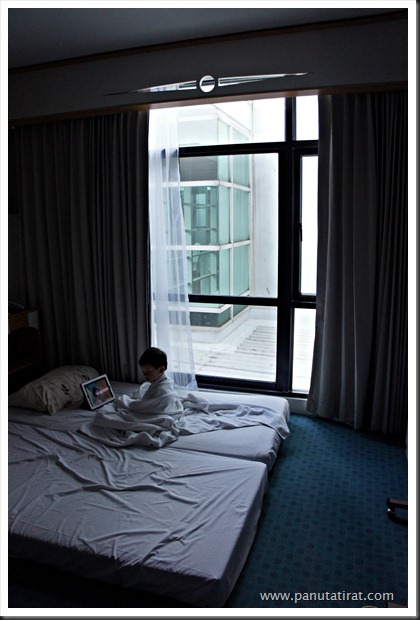 At the hospital your temperature reached 39.3 (not again), the Dr. decided to do another test on you, and soon after it was discovered that you were suffering from Influenza A Type and that required a special medicine (Tamiflu), you were then sent home.

I arrived at around 18:45 to see you sitting on the black sofa, all wrapped up in your blanket watching Super Why on the iPad, there were no spring in your steps, it was obvious that you were very ill, your temperature was still way above 38. After dinner and a boatful of medicine I decided to carry you for a while, your stomach felt very bloated against my chest, I knew sooner or later you would be sick so decided to hold on until you did.

Call me Bangkok Nostradamus, first came a throat full of water, and I thought that was it… of course I was wrong, about thirty minutes later the full orchestra of rice, pork and vegetables :) decided to follow suit, everything came out, even the medicine… after cleaning you up, we decided it was safe to put you to bed, we were wrong. During the next hour and a half you were sick three times and these were gut wrenching, Papa help me kind of a session.

Considering the Influenza, the vomiting and very high temp. it was decided to admit you to BNH, this time there were no sense of panic just a sense of urgency, and in no time you were again on a table all wrapped up in what I think is the largest Velcro pad in the universe, of course it was needed so that the nurse could put the IV line into the back of you palm. 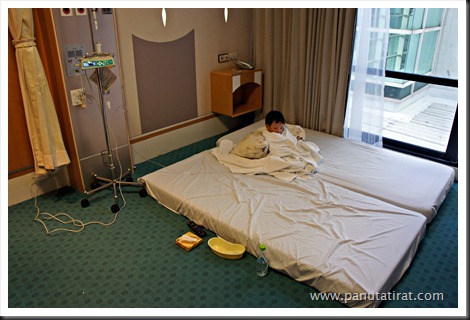 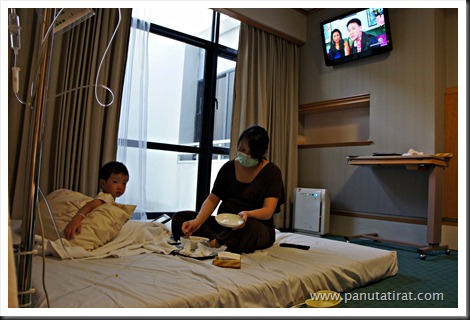 All that happened last night, it is now almost noon on the Saturday, your Mickey Mouse show had already ran for about an hour, your mother is a sleep on the couch next to you, you are now sleeping on the mattress and I am writing this blog in a your darkened hospital room with a small cup of horrible coffee by my side, all contented that you are now in good hands (although your high temperature still bothers me). 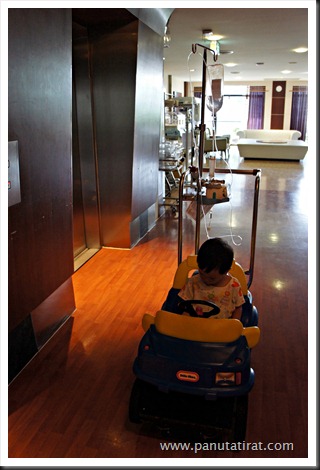 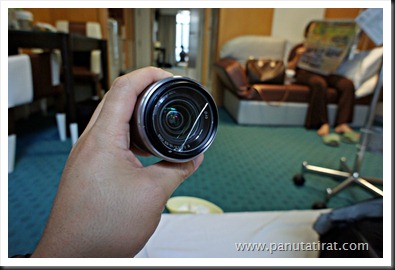 This morning after your breakfast I took you out in one of those special push car just to have a quick walk around the hospital, not wanting to waste a photo opp. I took the NEX 5 with me and promptly dropped it, lens first. Luckily the clear filter took all of the blunt and everything seems ok, of course your mother think I had dropped it on purpose (a couple of weeks back I dropped the lens cap in the river (she thought that was on purpose too)), so that I could get a new camera… of course I denied it wholeheartedly, but after a bit of time, sitting in this darkened room drinking dire coffee I am beginning to think it was my subconscious who had dropped the camera this morning… perhaps I should take this opportunity to catch an appointment with the on duty 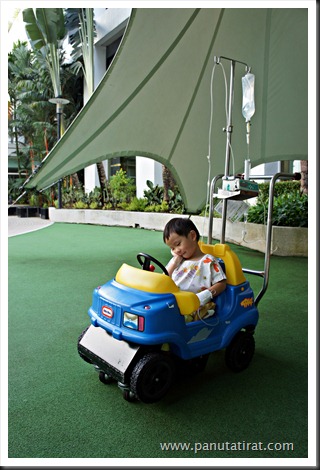