Suddenly becoming a father of two :)

I am not exactly sure of the timing, but it all must have started a couple of months back, when one morning as I was lounging around on the patio on the right side of the house, where an old washing machine sits stubbornly and unblinkingly staring at the gleaming silver water tank which stands further down the side of the house. 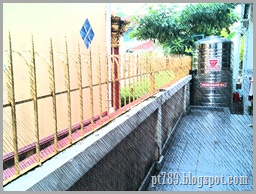 Suddenly there was a small, and tiny... ‘Meaw’... it came from over the fence. Next door is now empty, for well over a year now, the family of four who my parents kind of knew through a relative had moved out, although we were next door neighbour, like all modern and developed society, we just didn’t talk to each other, of course we often smile and nod our heads but that was as far we got, to be fair I could have made more effort, and so could he... we just didn’t click... well, at least we didn’t hate each other.

From the information that I got, they moved because it was just more convenient to be closer to the city, especially with two young children, like the dilemma we are facing right now, getting you to school on time would be impossible if we continue to live here, so like this family before us, we are also moving. 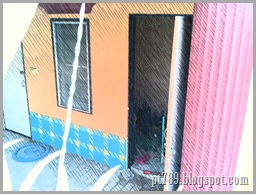 Anyway, back to the ‘Meaw’... their storage room was immediately next to our house, the door was slightly opened, it was dark even in blazing sunlight, but one could make out a small movement, adding this to the ‘Meaw’ you didn’t need to be Sherlock Holms to deduct that it was a kitten... But where was its mother?

I asked Pui (house keeper) about the mother cat, but she hasn’t seen the mother for at least three days. Somehow my imagination ran wild, ‘Three days without food/water/milk, OMG it will die soon if we don’t do something, NOW...’.

We have been putting out cat food for big stray cats for several months, and there are three or four regular customers, but that food is for grown up cats and certain not suitable for kitten... Luckily I am familiar with ‘Tom and Jerry’, and Jerry loves his milk... (light bulb flashed brightly above my head).

Decided to climb over the fence, and it was obvious that my ninja ability was still there in abundant (not), next door’s floor is slightly lower than ours, so not anticipating that the drop was further at their end, meaning when I expected the floor to be there, it just simply wasn’t... the end result was not pretty, lets just say I made it in one piece.
Their storage room was dark and messy, the air was stale and damp, I could not find a light switch and the ‘Maew’ had suddenly stopped... Being as wise as I am, and when faced with this situation, I am sure everyone would have done exactly what I did... I began my well practiced ‘Maew’ call... It worked (to my surprise).

A little kitten poked out its head from a pile of old boxes, it was tiny. As soon as it came into view, we executed our action plan, Pui managed to find a small plastic tray, Gio was carrying Matt (2 year old), who was wide eyed and with both hands holding on to the fence. A tray full of milk was placed at the storage room’s door, another try was filled up with water... then I left, making note to get some kitten food...

So for the next month of so I had to climb over to the kitten once a day, usually in the morning to give it food and change the water, when it was a little older it began to venture out, but still sticking very close to the storage room. After several weeks of climbing, I found myself having to go overseas on a business trip, “Who on earth was going to climb over there now”, I certainly didn’t want Gio to be the one who had to climb over the sharp spear liked fence.

With MacGyver as my mentor, it was simple to put a couple of holes onto each side of the plastic tray, then lodging in a thin stick into the holes turning it into an anchor point for the plastic rope, now there was no need to climb over anymore. While I was away for about a week, Gio had the task of pulling up the tray each morning and filling it with Kitten food.

Forward a few more weeks, the kitten, let me be more precise here, it is a red/ginger/orange tabby, and it was so pretty, but we weren’t sure if it was a boy or a girl, and to avoid attachment to it I had decided not to give it a name. Well, soon it was climbing over the place, and one morning it was climbing on the fence then coolly jumped into our side of the fence.

Well that was it, we decided to feed it over on our side, and day by day it was getting prettier and prettier, to be correct handsome... Only found out it was a boy a few days ago, I never knew that it was impossible to tell at the beginning stage of development. 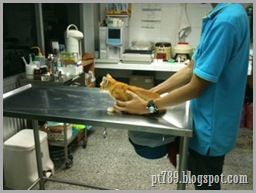 A few months on, Gio decided to name it ‘Boon-Num’, I’d guess a direct English translation would be ‘lead by good blessing?’ please note the question mark :) Anyway, last Tuesday Gio ran out of idea on how to keep Matt occupy, so she decided to take Boon-Num to the vet to get it vaccinated, apparently Matt was so excited and super hyper, however Boon-Num was just the opposite. Once back home, it ran away and sat quietly by the front door, and remained there for the rest of the day. 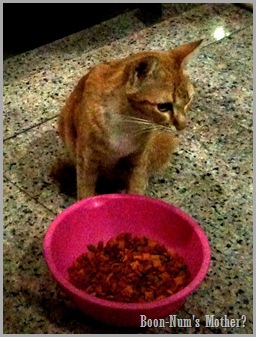 I was worried, but by the time I got home he was back to his playful self, Gio had bought it the coolest collar (bell and all). I just realised that I may have taken a photo of Boon-Num’s mother back in March, I wonder where she is now, all of us hope that she is keeping well somewhere out there.

Here is the latest picture of Boon-Num taken a day before it went off to the vet… he is beautiful, more importantly Matt loves to play with him, as much as it is now built into his routine :) totally adorable :) Soon we are going to move, and now we have the task on how to keep on feeding Boon-Num during the week days, no solution have presented itself yet, but I am sure we’ll find a way as he is now a member of our family :) 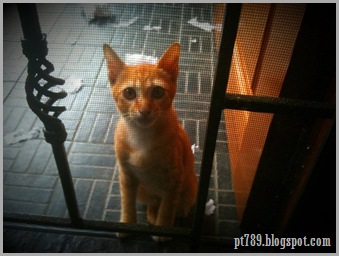 Email ThisBlogThis!Share to TwitterShare to FacebookShare to Pinterest
by Panu Tatirat at 18:22
Labels: Family