What an interesting week :)

What an interesting few days, your mother noticed that you were slightly hot on the Friday which was your final day at school, then on the Saturday the slightly hot turned out to be hot, and very quickly turned out to be your first visit to the hospital, after all the meds. your temperature was still raising, we gave it the night to see if it would get better. Imagine your mother who was also suffering from a flu (but due to her pregnancy, no medications were allowed) having to get up every hour or so just to check you temperature praying that it won’t go above 40C. 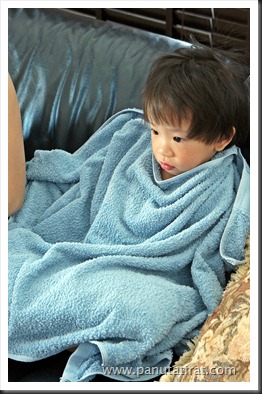 As it turned out, it almost did, on the following day (Sunday) it reached a close 39.7C that had prompted us to take another visit to the hospital, after receiving more medicine all we could do was to return home.

On the Monday, nothing was working fast enough for us, decided to change your Tylenol to Ibuprofen, it immediately worked, trust me you couldn’t have heard a louder sigh anywhere in the universe at that moment :)

All throughout Monday’s night I was up every hour or so measuring your temp. just so that we know exactly when the effect of the medicine had worn off, and it certainly did at around 3 am (Tuesday), signaling another dose of Tylenol.

By Wednesday you were pretty much down to normal temp. without any help from the medicines, however, that was when it was my turn to get ill. As soon as I woke up on the Wednesday I knew something was going to be very wrong in deed, haa haa haa. Ended up going to work as usual (too many important meetings to take the day off), then coming home that night was like reaching land after being lost at sea for 10 years (on a small dingy boat too).

On the Thursday, first thing I did after breakfast was to visit the hospital, after which I ended up sleeping for the next nineteen hours or so. And so here we are on the Friday (again), everyone is recovering, evn your mother and at this moment in time there is no one I worry more about than your mother :) hope things will also get better for her too (and soon).

Email ThisBlogThis!Share to TwitterShare to FacebookShare to Pinterest
by Panu Tatirat at 21:26
Labels: Baby, Family, Unforseenable