What a Pic! [Arc of Discovery] 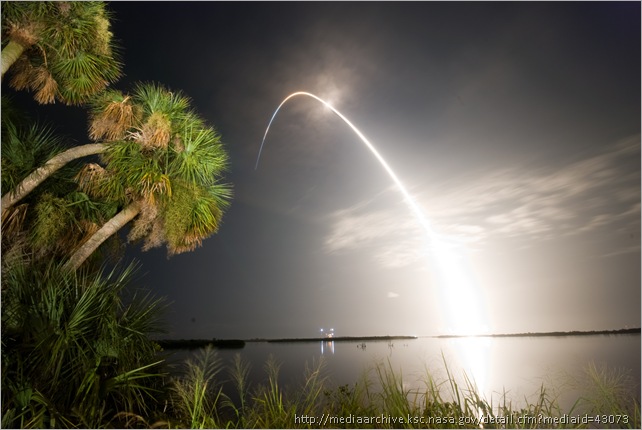 CAPE CANAVERAL, Fla. – Viewed from the Banana River Viewing Site at NASA's Kennedy Space Center in Florida, space shuttle Discovery arcs through a cloud-brushed sky lighted by the trail of fire after launch on the STS-128 mission. Liftoff from Launch Pad 39A was on time at 11:59 p.m. EDT. The first launch attempt on Aug. 24 was postponed due to unfavorable weather conditions. The second attempt on Aug. 25 also was postponed due to an issue with a valve in space shuttle Discovery's main propulsion system. The STS-128 mission is the 30th International Space Station assembly flight and the 128th space shuttle flight. The 13-day mission will deliver more than 7 tons of supplies, science racks and equipment, as well as additional environmental hardware to sustain six crew members on the International Space Station. The equipment includes a freezer to store research samples, a new sleeping compartment and the COLBERT treadmill. Photo credit: NASA/Ben Cooper

A picture like this make me missed my (very recently) stolen camera even more (basta%$#), I am not saying that I can take one like this but “What a Pic!”… :)

Email ThisBlogThis!Share to TwitterShare to FacebookShare to Pinterest
by Panu Tatirat at 20:14
Labels: What a Pic