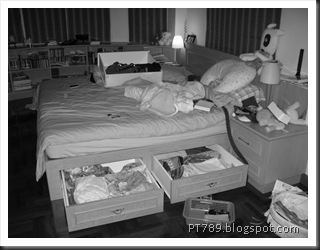 Came home slightly later this Friday evening, must have been around 22:25 when we walked through the door. Gio took the baby upstairs while I unloaded the car…, everything was so normal, that is until Gio shouted “We’ve been burgled”…

“Stop joking around” was my answer, until I went up stairs and saw the bedroom, oh what a mess!

The next question was so natural, “What have they taken!”, the list is short but expensive one… Nikon D90 (less than 6 months), old iPod, Sanyo VDO camera, a little Sony Photo printer, 3 watches and a Wii (it was gathering dust anyway).


So we are not feeling too chuff at the moment, a bunch of police just came and went, tomorrow I have to go to police station to give a formal statement, I am not expecting much, just like the last time in May 2007 nothing ever came of their investigation.

Had a quick chat with the police and discovered, that this night there have been so many cases of houses being burgled, it did not cheer me up one bit. 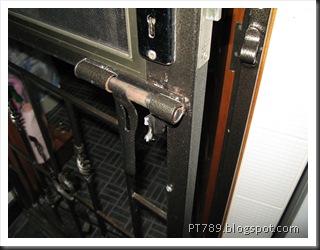 Point of entry, they tried the window first but failed, I can only assume that they then pried open the kitchen door, they must have come totally prepared, little bas%$&ds.

Went on facebook a few minutes ago, looking at the feed back, several friends have also been recently burgled as well. What worst is that most of the police are now on duty somewhere near the house of Parliament because of the mass gathering by the red shirts…

Email ThisBlogThis!Share to TwitterShare to FacebookShare to Pinterest
by Panu Tatirat at 01:10
Labels: Unforseenable