The last time we went out to anywhere with my parents, you were still sucking your umbilical cord for nourishment, a couple of Sundays back your mother had to go out to a function in the afternoon, thus leaving yours truly alone with you.

I did what any responsible dad would do... I called my mother :)

I wasn't daunted or anything, the only concern that I had was your lunch, I am not the best cook in the world (nor the worst either, although your mother would beg to differ). Luckily we have one of those slow cooker, so your mother had lovingly prepared all the 25 billion ingredients, put them all in the cooker and let it simmered, and all I had to do was to add a handful of spaghetti.

By the time your mother had left (about one pm), you were asleep, the house was messy and strangely quiet. Again I did what a responsible dad would do, turned on the telly :) I had it all planned out, my mother was going to be here exactly when you wake up, and she will automatically be on auto pilot and take over the whole operation of feeding you your lunch.

Time was getting tight, two o'clock had already come and gone, you were starting to stir but there was no sign of my parents, then the phone rang… They were stuck in traffic and weren’t sure when they will get here. There was no way out this time, as soon as I had put the phone down you were already sat up in your cot, still a little groggy, I love holding you when you just woken up, all nice and warm and very cuddly :)

At least everything was ready, the food was just right, the spoons, plates and cups had been laid out and your high chair was already in placed. Only after a few minutes you were back on your turbo mode and it was time for lunch, which unexpectedly went a lot smoother then I had anticipated, the last time I gave you lunch, it took over an hour, and half of it was over the walls and floor. This spaghetti dish smelt so delicious I’d wished your mother made more of it as there was none left, you ate it all. 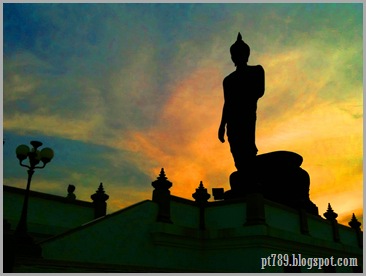 Like a bad sitcom, my parents arrived as soon as your lunch was over and you were in high spirit, ready to play, play, and play :) Not wanting to stay in the house, all of us jumped into my car and headed off to Putthamonthon (probably the biggest Buddhist Park in South East Asia), in its essence it is a massive park with a huge Buddha sculpture at the heart of the Park.

After driving a while, we found the right spot for you, there was a small children play area that sits opposite a huge lake, along the way we had stopped off and bought three loafs of bread and 3 bags of fish pellets. Naturally you ran towards the play area with my mother trying to keep up, the frequency of your little legs shuffling is pretty amazing. All the while with my mother in tow, you had a go on the slider, the swing and a see-saw… 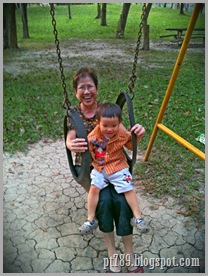 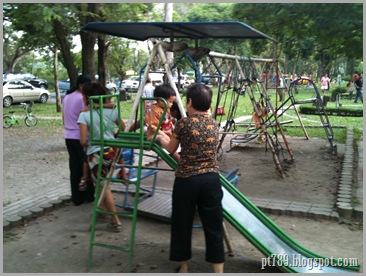 After the play park, we hopped across a small road and headed to a grassy bank next to the lake, I have a couple of clips of you trying to throw a piece of bread into the water, shall we say it would have gone further if had just dropped it :) 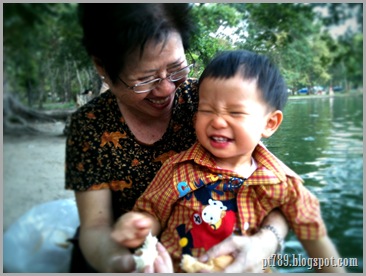 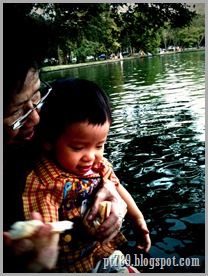 The best of all for me was to see how my parents were having such a great time, having grown up overseas and spending only 3 months out of a year in Thailand for over 18 years, then coming back home and immediately started a nine to five job have initially created some issues between us that needed tuning, all is more than great now, though I must admit all of the issues were at my end they were and have always been fantastic.

So it was a grand Sunday, after Putthamonthon we went to a small local restaurant to pick up a few dishes to take home for your mother, the old clichés comes to mind, ‘the eyes were bigger than our stomach’, well at least we’ll now have something to eat in the morning…

Email ThisBlogThis!Share to TwitterShare to FacebookShare to Pinterest
by Panu Tatirat at 12:19
Labels: Baby