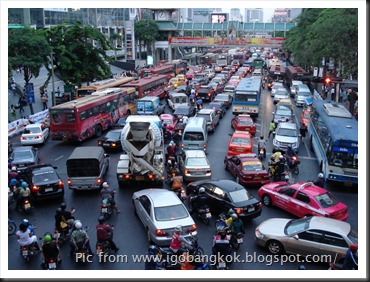 This is mostly from personal experience so subsequently it is from a UK perspective. I learnt to drive in the UK, got my first license & car in the UK and after driving for about 5 years I came home, wow, what a learning curve :)

Getting the wrong message

Out of all the differences in driving behaviour and driving manners, the most vital thing to remember is the flashing of headlights. In the UK, if a driver started flashing the headlights at you it simply means 'I am so kind and having such a great day, so I am now giving the right of way to you, please don't forget to say thank you, :)', of course you would pull out and certainly give him/her a quick wave/nod of a heartfelt appreciation and off you go. For the same action in Thailand would simply get you killed, over here flashing headlights is a stern warning, 'if you come out I am going to ram you with all of my might and send you to hell's deepest pit, please take heed na krub'.

I am of course talking of the 'right of way' here, over there the right of way is far too complicated, involving what road you are on, are you coming from the left or the right, even the speed you are travelling. Over here it is just a simple matter of size, of your vehicle :), the bigger you are the more of the right of way you have :) that is unless you have balls of steel (or nerve of steel for the ladies), in that case, the right of way will always be yours :) but that does not mean the other drivers won't be pi**ed off at you, can you feel the road rage brewing?

I believe Road rage is all the same globally, pure anger from the naval of your stomach suddenly erupting with such ferociousness that you loose all sense of control, then they pull out a gun and shoot you, that is road rage over here. So please if someone cuts you off, try not to return the favour unless you like eating lead for supper.

Express Way is a bit strange

For a 'right hand drive' or 'left hand traffic' countries like us, the slowest lane on the Express Way would be on the left, meaning the people who are in no hurry or trying to achieve 30 km to the litre will drive on the left hand lane.

Just wanted to give you a head up here so that you don't get too frustrated on our Express Way. Well, the slowest driver tends to drive in the middle, I have no idea on the logic behind this, may be they are just very kind in opening up both lanes either side for overtaking, oh yes and we do, do overtake on both sides, so please be careful. Admittedly most of the overtaking will still be on the right, but now and then I have seen super fast car overtaking on the left.

Comparing with some of the other South East Asian countries we are comparatively quite quiet :) no one uses the horn unless it was really necessary or in some rare cases to vent one’s frustration. Even in very heavy traffic where people tends to push left and right trying to find a quicker way through a wall to wall of cars, often cutting people off and often very pointless. I am proud to say we are pretty chill about that, it must have been through natural selection because if one starts pumping the horn sooner or later someone will shoot you, so through natural selection the ones that are left are pretty chill when it comes to traffic jam and poor driving manners that come with it :)

Another plane of existence

Motorcycles, although you can see them and they ‘certainly’ can see you, but you’ll feel that you don’t exist. Don’t loose your nerve when you see ten or twenty motorcycles speeding down in between cars stuck in traffic, and if one is stuck next to you, either fold your side mirrors or just move your car a little so that he/she can be on her way, then you can sit back and be very envious that they are now moving and you are still stuck and going nowhere fast :)

It is common to see motorcycles riding against the traffic, they will do their best to hug the footpath but it can be a little daunting when there is a bunch of them, there were times I had thought I was the one who was driving the wrong way down a one-way street, by the way if you hit one of them you’ll be in the wrong, see next paragraph :)

Heads they win, Tail you loose :)

Saving it for later

There are loads more (driving upcountry is so different than driving in BKK), just needed the time to get them out, by the way walking is even more complicated on Bangkok’s streets, but at least you’ll always be in the right when a car / motorcycle hits you :)