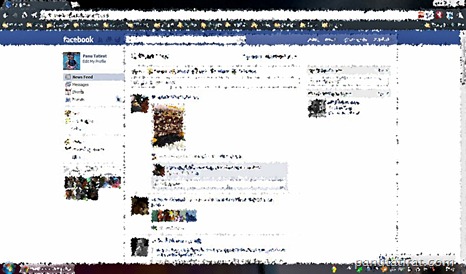 It certainly was not love at first sight, I proudly would classify yours truly as a nerd/geek, so I was already in the Facebook (FB) universe around July 19, 2007 at 22:34 (according to this FB app), way before anyone I knew even knew of FB. I took a good look around, tweaked all the settings until I was bored, posted my (plain) profile pic. and promptly left (at that time High5 was all the rage here in Thailand, especially at work, and I wasn't particularly a big fan there either).

Becoming a born again FB is a bit of a cliché, like so many it was through a very old friend whom I have not seen (nor contacted) for over twenty years (couldn't thank her enough, we attended the same prep school, so, so, so many years ago), she had suggested that I join Facebook, (now, how on earth did we got in touch in the first place is still foggy in my mind, perhaps it was through one of those 'Friends reunited' site).

Since that born again moment, it was scary how quickly 'my' FB bubble got populated, certainly it was full of ooohhhsss and aarrrrrrssss, '%$#^ look at him/her' (I am sure they were mouthing the same words, may be even at the same time). Certainly with the user group of my age, I can only assume that the 'holy crap' moment often comes when a long lost friend popped up as a friend request, and definitely I was totally hook line and sinker (another cliché?), probably more than most.

The biggest piece of the 'friends' pie chart is easily my friends from secondary school (have not see them for over twenty years), so like I said earlier, as each one came up it was full of 'Oprah' moment, at Wellington (school's name) it was kind a my thing to always be taking pictures, especially in the house (this was a boarding school, Darks was my house, think of Harry Potter, replace the broom stick with real mop, Quidditch with Rugby, The one who must not be named with our Matron (only kidding... she was lovely) and you are half way there).

Each night during my honeymoon with FB, I was up way beyond what a professional 'employee' should, and what was I doing with / for my beloved FB? Sifting through each photo, choosing the presentable ones, scanning it, uploading it to FB, label it carefully, tagging the start all over again for the next batch. There was nothing I wouldn't do, I was shamelessly addicted to the comments... give me more, hoping my friends would find as much joy as I have all these years... and they did.

At the same time, FB was a part of me as my lungs were, each step took outside of the house seemed all worthwhile to be shot to FB, it was done really without thought, like a spoilt brat, it was all about me... then suddently I got bored... not enlightenment, just bored of putting up irrelevant rubbish. This gave me time to consume rather than spewing crap into the cesspit, it was quite a change.

Don't get me wrong, I am still in love with FB, but more like a loving couple who had just celebrated their diamond wedding anniversary, I am now wise enough to have wholeheartedly chosen to listen to her rather than talk back, and FB have grown to be very mature, secure and have branch out to other interests such as vdos and locations.

To me FB is still the only place where I can keep track (and contact) of all my friends, it may try to be a new platform of the modern lifestyle, it may be the number one content creator, it my replace Flickr, if done right it could be the center of all knowledge (lol) and cure cancer, well it could even win the Nobel Prize, %^$$ it had already helped Egypt to become free (but for how long). But for me I think I have found the best side of FB, it's the front page news of my social life... haa haa haa, now where is that Diaspora.

Email ThisBlogThis!Share to TwitterShare to FacebookShare to Pinterest
by Panu Tatirat at 00:53
Labels: IT/Tech./Photo., Office