What a fright you have given us, we had left you with my parents (Saturday 02.08.08, 6 days before the Olympic) for a few hours, while your mother and I spent some quality time together (I am pretending to be romantic here, basically we just went shopping for you). 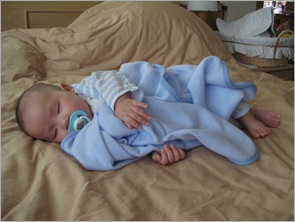 My mother called around seven saying that you were crying, we didn’t think much of it, because at the age of 2 months it is in your job description to cry, but this time the crying sound over the mobile phone was somehow different, it wasn’t a frustration cry or a ‘feed me’ cry, you were really, really screaming. 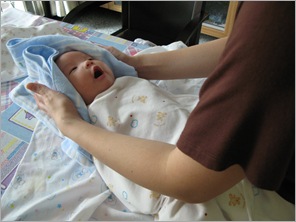 I must say your mother handled it much better than I did, to save time your mother was dropped off at my parents while I drove off to find a parking space. You would always have better luck choosing the winning numbers in a lottery than finding a parking space in the Worachak area on a Saturday evening (the notorious Klong-Tom weekend market, where you can find anything from used washing machine parts to used false teeth (stolen)). 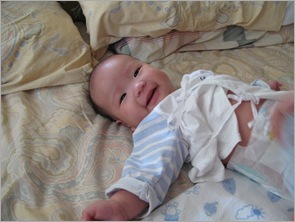 I had just barely parked the car when I was ordered to pick you up. Hearing you scream in full was so scary, you were in so much pain, and the hospital was almost 30 minutes away. The next 30 minutes ranked very highly on my ‘most hated moment in my life’ list, you and your mother was sitting in the back and she was doing everything possible to take your mind of the pain (not very successful), and I was driving like a Shanghai taxi driver. Flying over the speed bumps at the speed of light probably didn’t help you one bit, but for me, driving as fast as I could was the only thing I could do. 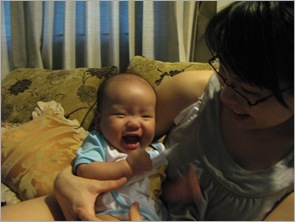 BNH (Bangkok Nursing Home) hospital was so peaceful (it must have been around 20:00 when we arrived), only a few people was sitting in the large entrance hall (Information to the left, escalator to the right leading to the paediatric clinic) and cashier straight ahead. Your screams filled the hall magnificently.

We were then told to go to the emergency section, once again we had to go down the escalator, and through the main hall. All eyes were on you as we came down the escalator, by that time my nerve was in bits, your mother was carrying you while I was trailing behind, and all I could see was the pain on your face, I believe you could not have screamed any louder, you have reached the 11th level on the Spinal Tap scale. 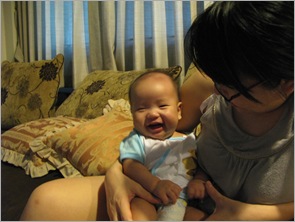 Everything was so slow, where was the *&^%*&# doctor? Once she got there (she was very pretty but looking very tired), she began to talk through all the things that could be causing you the pain (your mother and I had expected that it was gas from the very beginning). She began to describe the various cause, followed by the examination on that prognostic (insect in your ear? Let me take a look. Insect in your nose, let me take a look…), and there were so many things, I was getting so frustrated (but I behaved like a well trained bunny, nodding all the while, but on the inside I just wanted her to give you something for the gas!).

Finally the penultimate prognostic, ‘bleeding in the digestive track’, SAY WHAT? Up to now it was just simple things; fever, things up your nose (ear), soar eyes… but to go from that to ‘bleeding in the lower intestine’??? Holy &*&%, and she went into some detail on this. “I am going to insert my little finger up the baby *&^&, and if there is blood on my finger tip, you’ll need to come in tomorrow to schedule for an operation”, and all this was said in such a calm manner it was so unreal (and all the while you were screaming your head off). 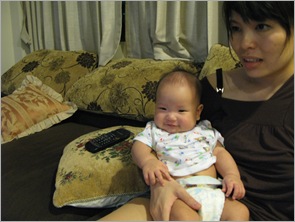 Luckily, there was no blood… and finally she came to a conclusion that it could be gas, in this electronic age I was told to go to the cashier while your prescription would be sent internally, I walked (trying to be calm) over to the cashier (all the while I can hear your scream in the distant), a lady from the emergency came with me, she was running ahead of me trying to do everything she could to make sure I get the medicine as soon as possible.

Of course it couldn’t be that simple, there was a queue and a lady who was having some issues with her bill, eventually I was able to make the payment for your medicine, and here come the second obstacle. The prescription was not keyed in by the doctor, the nice lady ran back to the doctor’s office at the same time your mother called to see why it was taking so long… I can only describe it as being like the greatest episode from Fawlty Towers, you’ll be glad to know I did not behave like Basil.


The medicine turned out to be Air-X (a normal over counter medicine), the nice lady took the medicine from my hand and ran to the emergency room (I tried to give her a huge score on the patience feed back form but she told me to put her whole department down in the survey). 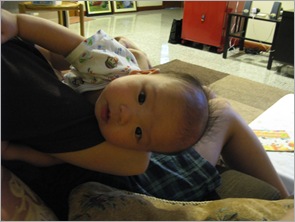 After a few minutes the screaming stopped and you began to smile again (another nurse carried you for a while, and that was great for your mother), we couldn’t be any happier (not to mentioned my parents who were calling every 5 minutes), and 30 minutes later, after we were absolutely sure that you were okay, we decided to drive back home, and along the way you had another attack… but not as bad as the one before.

We didn’t get home until around 10 pm, you were back to yourself at around 11 pm and felt straight to sleep (crying and screaming must have been quite tiring), no words can describe our feelings at that time, your mother was brilliant, holding you for all that time while you did nothing but screamed and screamed, don’t forget to thanks her!

Email ThisBlogThis!Share to TwitterShare to FacebookShare to Pinterest
by Panu Tatirat at 06:24
Labels: Baby