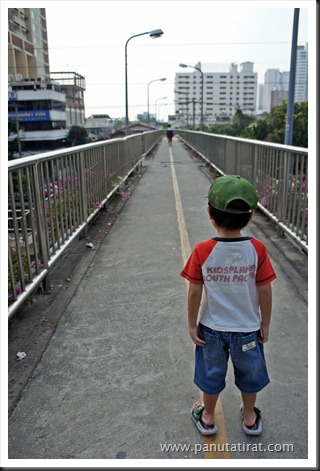 You would have thought that Saturday would be a relaxing day for you, it is a weekend after all :) Of course not :)

I usually wake you up at six, shower and shave (kidding), by six fifteen-ish you would be sitting down to breakfast, but on the weekend everything runs a little later and a bit slower.

We have to be out of the house by around nine thirty, to arrive at Chamchuree Square by ten, that is when your music lesson starts, well it used to be your piano lesson, but the new head of ‘Dek Lek’ division (a direct translation is ‘Children Small’) decided to turn the curriculum upside down, instead of teaching you piano, you are now being taught the basic understanding of music.

Anyway the class ends at ten forty five, it is then required of me to listen to the debriefing of the class for another fifteen minutes, adding the time of us messing around chasing after each other, it would be almost twelve by the time we walk through the front door and straight to having lunch.

By twelve fifty we would have to leave again, this time we walk over the long overpass footbridge to get to your Brain School class (mostly just fun and games that have some hidden values behind it, well that is what we hope anyway, more importantly, you got along very well with the teachers here (Kru Jib and Kru Pia)). The class is one hour, after which I would let you play for a little while before heading back to home.

Once home, probably around two forty-ish we would let you relax just a little before ushering you to your bedroom for your afternoon nap. We only allow you two hours for the afternoon nap, otherwise you would be running around at midnight screaming ‘I am not tired Papa’.

Once you are up (a glass of milk would be waiting), the afternoon is free time, sometimes I would take you to the park, funfair, temple or whatever that keeps you entertain, before returning home for supper, evening television/iPad and then bed… :) Doesn’t sound much, but trust me the hours just fly by when you are having fun :)

Email ThisBlogThis!Share to TwitterShare to FacebookShare to Pinterest
by Panu Tatirat at 00:43
Labels: Baby, Family, Matthias