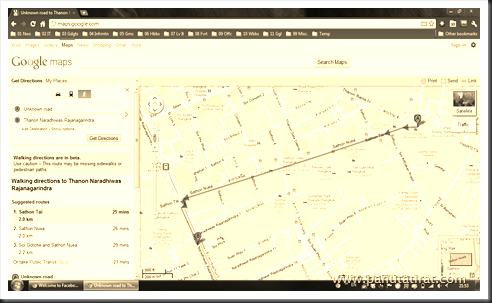 Luckily for me I was already at my destination (an underground station) when the sky decided to relief itself, the usual thing to do was to take the motorcycle taxi home, well in this type of rain only a fish is safe outside, but there was no way I was going to stick around and wait for the rain to stop, the rain was so heavy it felt like the Mayan had got the date of the end of the world wrong, perhaps it should have been on a day in June of 2011.

So from my magic rucksack, I pulled out a girly umbrella (one has to see it, it is very girly) and decided to walk home, I have driven on these roads enough to know that it was going to be a long walk, but it was better than waiting around, besides I had nothing to do the battery in the iPhone had already died a long time ago.

Managed to get home in about 40 minutes, but it got me totally addicted, now I try to leave work early so that I have time to walk home, the average time is now down to 25 minutes (2.2 km, without the heavy rain), perhaps I should get a bike? :)

Email ThisBlogThis!Share to TwitterShare to FacebookShare to Pinterest
by Panu Tatirat at 22:17
Labels: Event