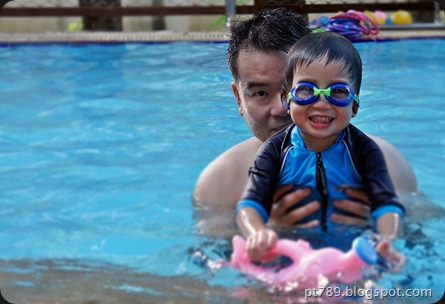 Since our return from a short break in Pattaya, you were still poorly, running a slight fever and your diarrhea wasn’t that much better, so the only thing to do was to give you the medicine, the much dreaded antibiotic.

The first bout was set for Monday (11.04.2011), as it turned out it was the worst ever, you had decided to grit your teeth which was like 'checkmate' in chess, this time you were in full control, if it wasn't so important and essential to your well being we would have given up, but of course we could not.

It must have been about seven or eight minutes in, after constant crying and screaming not to mention the tears running like rivers during a monsoon season, my patience was running thin. You decided to loosen your grit just a little, enough for me to try to inject in the med. of course you spat it all out, so I went back for a refill (much to your disappointment, which brought even more tears and screams).

Did I shout at you this time, 'no', but I was so, so close, the words were firmed and to the point, and I must admit it, it did have 'anger' mixed in because it was so frustrating! I ended up going for a couple of refill before I gave up and hoped that after all the mess, enough of the medicine would have gone down. By the time I was cleaning up my mind was already on the following morning, will it be this stressful again?

As you can guess by the title of this blog, things were fantastic the following morning... Your mother got into her 'hold Matt down position' and I was already in my ‘med. injection pose’, then your mother gave you this question, 'do you want Papa to give you the med or will you take it yourself', there was a very quiet whimper... "Matt do it", of course in my mind I thought for sure that you would spit every last drop out (only 5 cc).

The medicine was in a syringe, so we let you sucked the syringe a little followed by a gulp of water, this went on several times and after a couple of minutes you had swallowed all the med. without a single drop touching the floor. We can not tell you the jubilations and the cheering your mother and I had, the only thing that could bring me the same fantastic sense of joy would probably be seeing England winning the world cup in 2014 :)

Email ThisBlogThis!Share to TwitterShare to FacebookShare to Pinterest
by Panu Tatirat at 00:56
Labels: Baby, Family