The photo (left) is a bit of a spoiler… :) your team (Green) won the gold medal! Trust me baby, you and your team mates have no idea how stressful that was. Right from the very beginning, we were told the organiser had deliberately put together a weak ‘Green’ team, as ‘Green’ had already won the cup for the past two years.

There were four colours (teams) in all, Green, Red, Blue and Yellow, each colour was made up of a selection of children from different classes and also from different age group, so you and your class mates were split up between different colours. (By the way, it rained, so the whole event had to be taken in door').

Now getting back to the ‘Green’ being a weak team… right from the very beginning, I knew that this wasn’t so, the older children was taking real command of each game played.

You participated in two team events, winning one and came second in the other, I am sorry that I can not post any photos here, as it just doesn’t feel right posting photos of other people’s children.

The ‘Green’ and ‘Blue’ were neck and neck heading into the final event, the “Tug of Gory Death” (sorry, a bit dramatic here, it was a ‘Tug of War’)… (queue back the dramatic music), in the first semi-final, ‘Green’ had a hard time dispatching the ‘Red’, but they were through to the final, while the ‘Blue’ had no problem getting rid of the ‘Yellow’ in a somewhat one sided match. So, this was it, the very final event will decides who lifts the cup of champions… the atmosphere was intense, the sound of cheering parents were deafening, the passion was overflowing… it was time…

Each team strained the rope, the referee lifted his foot and the match was on! The ‘Blue’ had immediately took charge of the pull, the ‘Green’ was looking in disarray, each team member was swaying from left to right like a set of unorganised pendulum, the ‘Blue’ was fulfilling their deadly form they had shown in the earlier semi-final. You have to see the vdo to understand what I am about to say… like a phoenix, ‘Green’ being a millimetre away from loosing everything, sudden found their rhythm… pulling in unison like a team with a purpose… In a blink of an eye, the match was won… Now I know how the people of England felt in 1966 :) (only kidding). 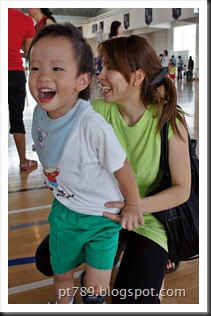 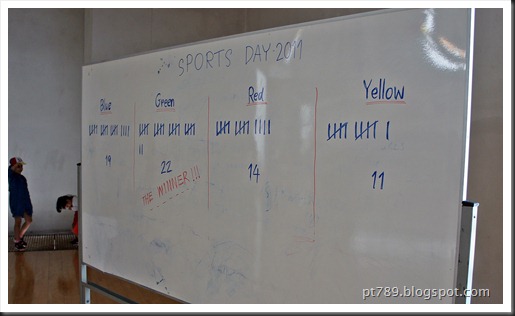