My only wish this Christmas…

My only wish this Christmas is for a boffin to re-invent all of the known medicine for toddlers.

Our Matt is about two and a half, and after a visit to the Doctor last week, he was given 4 bottles of liquid medicine. One for his cold, one to ease his congestion, one to ease his phlegm and the most important one was the antibiotic, all of these came in different colours and flavours; green, yellow, orange and white...

Obviously I took the easy way out, all of the above went into his milk except for the white antibiotic (not allowed to be mixed with milk), and of course there was no hope in *&^^ that he was going to willingly swallow that.

Who the *&^^ would invent an antibiotic for toddlers that is a thick white liquid and smells like a million bananas being squeezed into a single drop! It was like making him swallow ‘over ripen banana flavoured Tipp-ex’. 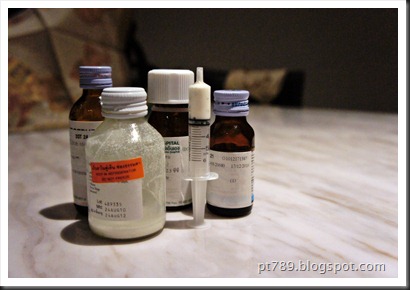 And of course the dreaded syringe had to come out, oh what joy. Giving him this antibiotic can be classified as torture for both him and us. We hate it, the missus have to lock down his arms while I use one hand to gently squeeze his mouth, of course he would be gritting his teeth like his life was depending on it, you would have thought we were giving him poison (perhaps we were, perhaps it was really banana flavoured correction fluid).

After getting through his gritted teeth, comes the most powerful tongue in the known universe, it is like duelling against a giant one tentacle octopus, the syringe would be fighting to get into the correct position, while the tentacle would be cunningly getting in the way and pushes the syringe out.

Ok, I am in position to deploy the correction fluid, I am now gently squeezing the syringe to release the ghastly white paste into the deepest side of his cheek; his final trick is a classic and I have no idea who had taught him to spit while his mouth was fully open.

It’s like a giant whale’s blow hole, for a millisecond I could see that he had blocked off his throat, and most of the white ooze is just laying there, and in a blink of an eye I could tell that he was drawing in air through this tiny nose and next comes the release… just like a whale’s blow hole… I never knew the white thick antibiotic is so difficult to get out of clothes, face and hair.

The counter punch is to make him swallow before the air intake… not always possible… of all the bouts we have taken, I’d guessed we are talking about 50-50 success rate, which is pretty darn good, did I mention the crying and the screaming that comes with every bout?

I lost it once, ended up slapping the sofa and shouted at him like I was an idiot, of course I felt absolutely terrible straight away, I was making him drink correction fluid that smells like a banana, anyone would fight tooth and nail against that too.

Coming back to my wish, someone please just invent an odourless and colourless medicine with a consistency of H2O, but at the same time make it so potent that one would only need to use 1 cc instead of the usual 5 or 3 cc. Matt loves to drink water from a syringe, he can go all day long pushing syringe after syringe of water into his mouth, but anything else is just a no no…

So Dear Father Christmas, please, I have already been watching out, and I have not cried and I am certainly not pouting… so please just give me a boffin who can make my wish come true…

Email ThisBlogThis!Share to TwitterShare to FacebookShare to Pinterest
by Panu Tatirat at 01:07
Labels: Baby, Event, Family