The Thai Government still can not find the ‘fat lady’.

I am just the one drop in the ocean of opinions, comments and analysis that is bombarding the media and to own up to my naivety, I have never expected it to turn out this bad. Yesterday after the Army had moved in to disband the red shirts, overcoming some resistance along the way with some fatalities, they had managed to forced the ‘Red Shirts’ leaders to surrender and gave themselves in to the police.

To me that was checkmate! So the leaders had been captured, the protesters were packing and leaving the Ratchaprasong area where they have been occupying for the past seven weeks, I was immediately thinking on office work because my office was right in the centre of it all and we have been told to stay away for the past three days, there were a lot to catch up.

How premature that was, since the news of the leaders giving themselves up, I had totally switched off from the news, only to discovered a few hours later that some of the Bangkok’s prominent landmarks were being burnt to the ground! 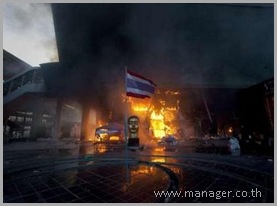 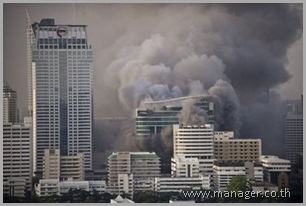 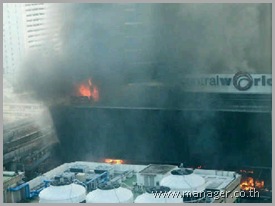 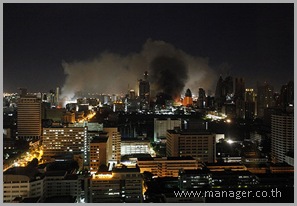 We were in fact walking in one of the Central Department Store (Pinklao), which is quite a way from the red zone, while we were just strolling the announcement came over the PA system telling everyone that the department store will close at three thirty, basically in thirty minutes and that the government had declared ‘Curfew’ from eight in the evening to six in the morning. There wasn’t a panic, only a sense of urgency, anyway, most of the people ended up sitting in their car waiting to leave the car park, it took us almost an hour before our wheels were once again on the road.

This morning we’ve found out that the government have also declared curfew for this evening as well as for the next three days, what amazes me is that new buildings are still being burnt down right now. I kept asking myself how?, the leaders are in custody, the army are on the ground, the police are out in force and yet new buildings are still being set on fire by small groups of bandits? How on earth is that possible, I’d though the hardest part was over!

Like they say, ‘it isn’t over until the fat lady sings’, obviously the Government is still looking for that ‘fat lady’, she is certainly very nimble for her size, because they have been looking for her for the past two frigin months!

Email ThisBlogThis!Share to TwitterShare to FacebookShare to Pinterest
by Panu Tatirat at 14:24
Labels: Thailand/BKK