All alone in Phuket, lol. 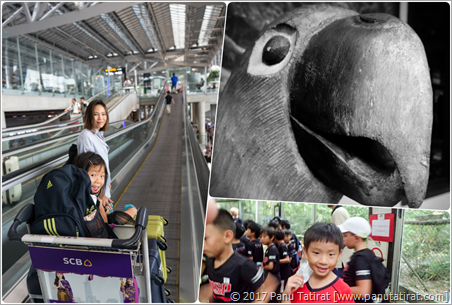 I can not believe this was over 4 months ago! I am so far behind on my postings and to add into the mix, Matt and I had just started Uncharted 4, and I am totally falling in love with The Last of Us (again for the 4th time)…

Back in early July 2017, as the final term was coming to a close, many parents were discussing various activities for their child / children, your mother was alerted to a summer camp in Phuket and she couldn’t signed you on soon enough, haa haa haa, Matt would be spending 2 weeks in Phuket, luckily Otto and a couple more from SHB would also be joining, at least some familiar faces will be around, lol.

You know me, Mr. Preparation... the first thing that came into my head was ‘communication’, on the weekend before you fly we all went out and got you your first mobile phone and sim, haa haa haa, watching you choosing your own number was a laugh, lol, and it took forever. The camp had a policy that they would keep the phone and would only allow the kids to have it only for a couple of hours per day (which later we found were not quite fully enforced, haa haa haa). Second thing was a camera, one must be taken to record all the fun time you had, haa haa haa, and the best choice was the old Olympus TG3 tough camera (waterproof and, (kind of) drop-proof)

In a rather short period of time Matt had to learn how to use Line (by far most popular messaging app. in Thailand), how to charge and the various phone’s and camera’s etiquettes. Overall it didn’t take anytime at all, haa haa haa haa.

Your mother and Mar flew down with Matt (also with other parents) and hand delivered you to the camp (she really wanted to inspect the camp first hand), lol, and to make it doubly sure, she also stayed there over the weekend as well, lol.

On the first night, your mother and I waited by the phone, we had created a group chat for the three of us... eventually your message popped up... hoooorraaayyy, we then switched to VDO chat for a while, and that was fun, you had settled down nicely.

As days went by, Matt was having so much fun the VDO chat got less and less and less, haa haa haa haa haa, your mother was fuming lol, and in no time 2 weeks had gone, instead of letting Matt fly back alone, your mother once again flew down to pick Matt up... I certainly was glad to hold you again, and I couldn’t wait to see what kind of horror photos you had taken on the camera I gave you. (Now with hindsight, you took over 300 photos… and all I could show is one wooden parrot head, and a photo of you (probably wearing the wrong shirt, haa haa haa haa haa).