Perth Day 8: We are not amused MH Airlines.

The return leg back to KUL then BKK was rather painful, haa haa haa. As we wanted to have a full day on the Saturday, meaning we decided choose departure time of 02:00 on the Sunday, with hindsight I don’t think we are going to take flight this late/early again.

From the last post, you were sleeping comfortably in a café near the check-in area, and the queue was building... so after my beer, it was time to go and line up. It must have been a full flight judging by the amount of people, but they had only 3 check-in counters opened... wow it took me almost an hour before it was my turn to check in (the lady at the check-in desk was superb, professional, polite, spotlessly dressed, well groomed).

After handing over the passports, I had to dash back to the café to carry Matt, while your mother carried Mar to the check-in counter. By then it must have been close to midnight, then there was a long walk to the immigration, Matt had already awoken and was stumbling around, Mar was still in dreamland, lol, and oh boy my arms were aching. 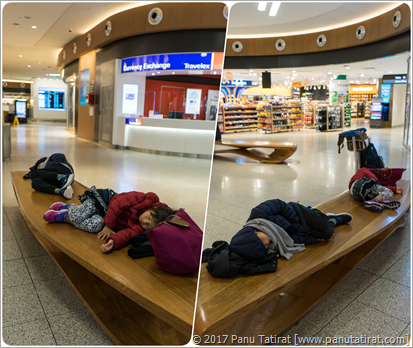 Getting through the security was a real pain, having to wake up Mar was the last thing I wanted to do but it had to be done. Then it was the immigration, which went through without any issue, it was just awkward with one very sleepy and one sleeping child, haa haa haa.

By then we knew things were going to turn from inconvenience to bad as by the time we had settled next to the gate (you two were now sleeping comfortably once again on the seats) the screen said the dreaded word ‘Delay’... the flight was delayed by almost 2 hours, more annoyingly no airline representative came to us to explain what was the cause of the delay! We were now in fear of missing our connecting flight from KUL to BKK, from a rough calculation we had just a little over 30 minutes to transfer, certainly very possible.

Your mother spent the extra time buying gifts, whilst I just walked around and zoned out for a while (easily done with me, haa haa haa). Boarding was again difficult, but at least we were on our way, but once we landed in KUL it went from bad to worse, haa haa haa.

As soon as the wheels touched down at KUL, we were ready to run, and ran we did to the nearest transfer counter, but the queue was long, and we really didn’t want to miss the connecting flight. By the time we managed to talk to someone, we knew immediately that we had missed the connection. It wasn’t because of us, I mean the passengers transfer can be done quickly between planes, but the issue was the off loading and loading of the luggage, and with thirty plus minutes, it was not long enough for the bag transfer without delaying the other flight.

Here comes a second punch to the face, for the few who remains and would accept the vouchers, they all have put a limit on each voucher (I think 14 MYR, that is around 100 THB), WTF MH? We missed the flight because of your inefficiency and probably poor management and this is all you can do for customer care? No wonder you are in so much trouble, I had thought it was because of the awful and unspeakable horror of the recent incidents that was the cause of MH downfall, but now I know that my assumption was wrong. The reason for MH poor performance which continue to spiral downwards is more fundamental, it is simply that MH is just a terrible Airlines, with pricing as the only way to compete, how can you sustain this in the long term perspective?

The reason of the delay was never informed to the passengers, perhaps MH delay is so common that they just gave up on sharing any kind of information, haa haa haa, I could go on and comment on the cleanliness, state of the basic equipment (seats, table, etc.), age of the plane and so on.

Here comes the knockout punch, when we arrived back at BKK we rushed to the luggage belt, and we waited and waited and waited... until a staff came up to inform us no more bags were coming, and that we should fill out a form. In the meantime the staff were seriously looking at his monitor, pushing a button here, pushing a button there, finally he looked up and told us that our luggage will be arriving in the late afternoon and should be delivered to our apartment no later than 20:00.

Email ThisBlogThis!Share to TwitterShare to FacebookShare to Pinterest
by Panu at 19:29
Labels: Flight, Travel, Trip