Last Thursday your grandmother sent me a short ‘line’ message, she was going for a shoulder operation on the Friday (morning) at the General hospital (10 minutes walk from my parents place), I was a little worried, although the shoulder operation was not considered as major, but for me I get worried even if she was going to the dentist, haa haa haa.

Took half of Friday off work, and headed to the hospital, by the time I had arrived it had already been a good three hours since she had come out from surgery, but the medicine was playing havoc on her, she was nauseated from the painkillers and could not keep down her food, being mildly diabetic meant not being to keep the medicine down was a bit of a problem. 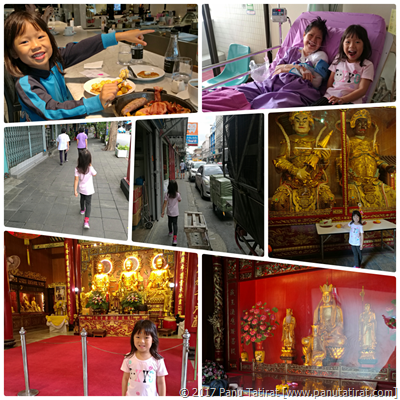 Super early on the following morning (Saturday), your mother had left just a little before six for the airport, she was heading to Phuket to pick up Matt. Obviously for breakfast I took the easy way out, lol, off to Dean we went. It has been a few days now since starting my 5 hours feeding window, so skipping breakfast while watching you eat bacon, scrambled eggs, pancake, potatoes, vegetables whilst I sip coffee was easy, haa haa haa.

Breakfast was fun, but soon it was over, and the next stop would be to the hospital. During the drive to the hospital, all I was thinking was how to keep the day interesting for you, my priority for the day was to be with your grandmother, as it turned out, it was more fun than ever.

Your grandmother was a different person than yesterday, she was a thousand times better, of course her shoulder was a bit sore but that was about it, lol. Mar was super helpful, fluffing up the pillows, getting the cold pack, and so much more, haa haa haa.

Truth be told, as it turned out, it was me who got bored first, haa haa haa haa haa, my aunt was amazing as usual, she was there to help her sister from the very first minute to the last second. After an hour or so, it was time of our adventure.

General hospital pretty much sits in the middle of old Bangkok, with mostly Chinese community, Chinatown is only a stone throw away and also there is a very famous Chinese Temple, after getting the direction from my aunt, Mar and I headed off on foot.

Wow, what a fantastic walk, it was nice change to the normal routine and for once I didn’t both of us lost, lol, I think it took us about 10 minutes to reach the temple, and for once it wasn’t busy. After a nice roam around it was time for lunch, and I had no idea where to go :-) but being in Chinatown finding a place to eat wasn’t going to be a problem, haa haa haa. 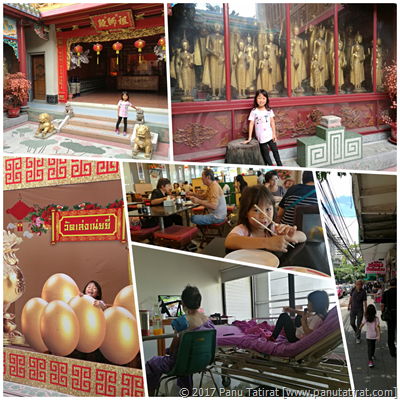 In fact five minutes after leaving the temple we found a Chinese Restaurant (haa haa haa, I wish I could say we’d found a Mexican eatery). Lunch was interesting, I was going to continue the day’s fast but come on... we were sitting in a nice Chinese restaurant in one of the most vibrant Chinatown in this ASEAN, of course I ate, haa haa haa haa, ate far too much too, lol.

Soon it was time to go back to the hospital, your grandmother was now well enough to walk around and was in a great mood, so it was time to take another short walk to see your grandfather. He was busy as ever, so we didn’t try to disturb him too much. We couldn’t stay for long as we had to pick up your mother and Matt from the airport.

So we went back to the hospital, my aunt once again went out and got Mar’s dinner, which was scoffed down in record time, haa haa haa. I had planned to pick up, down to the last second. The plane was due to land at 18:40, give it another 40 minutes to clear the immigration and pick up the luggage, so leaving at 18:00 was going to be perfect... haa haa haa.

And for once, I wasn’t wrong, haa haa haa. By the time I’d turned down the last stretch of road towards the airport, your mother called... It was so great to see and hug Matt again, so many stories were swapped on the drive home. Mar went into detail how the apartment got flooded (warrant another post, haa haa haa, that was a tough morning), Matt was going on about all the fun time he had (with some coaxing from us, haa haa haa haa).