Your mother and I try very hard to allow Matt to resolve his own problems without too much interference from either of us, and almost always it would turn out just fine.

It was time for another school assembly, this time Matt’s class was to put on a show, to highlight all the things he and his class had been doing since the beginning of the term. Just a few days prior to the show, we were told by another parent (and a friend), that some children had no lines, including Matt, well, at the beginning I was more than fine with that because there is no way everyone can have a part, right? But you mother could smell blood, so digging she went, lol. 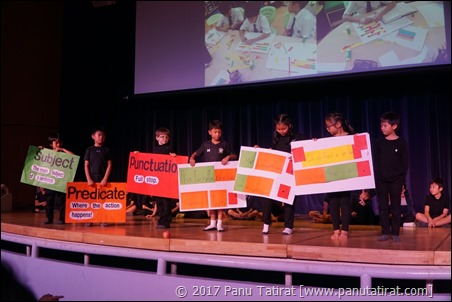 Instead of rushing to the class teacher first thing in the morning, I thought I would test the ‘communication’ book, wrote a few (very) polite lines (in my very best handwriting, haa haa haa) informing the teacher (whom we think is excellent) that Matt was slightly upset for being the only person who was not having any part in the assembly.

As anticipated, it was just an error, a lapse of mind (and I have many of those in any given day, lol), so all was rectified, lol, the whole class gave a splendid performance... I wished I had forgotten both my camera and phone though, as all I had was your mother’s very old mobile phone... :-)