Out of the blue, your mother told me that Ryo (pronounce Real (I think?)),  wanted to pair up with Matt on a science project. Suddenly, last year’s project flashed across my mind, to my understanding Matt was utterly under prepared for that one, and it didn’t fair too well for his confidence. But Matt was more keen than ever, and Ryo had an absolutely clear topic in his head, and even prepared all the equipment for Matt to do the experiment at home. 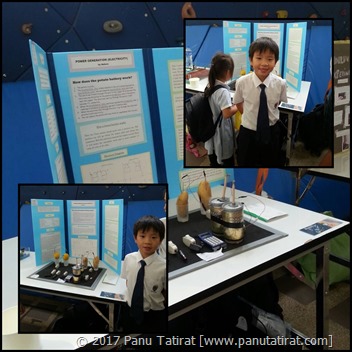 The experiment is an ‘olden but golden’, haa haa haa, making electricity from a couple of potatoes. The experiment was relatively simple, but getting Matt to fully understand, so that he can explain the concept clearing in front of the judges would be difficult, or so I’d thought.

When it came to it, getting Matt to understand the whole experiment was relatively simple, first thing was of course a little research on my part, once I’d understood it, it was a simple matter of breaking it down into bullet points. In short, acid in the potato breaks down the magnesium strip atoms into +ve ions and -ve electrons, the -ve electrons then travels through the wire to the copper strip because it’s attracted to the +ve hydrogen ions on the copper side, creating a circuit and producing hydrogen gas, and in this case along the way powering a small digital clock.

Ryo was super prepared, (even invited Matt to rehearse at his home all Saturday afternoon, must give your aunty Tip a huge thank you for accompanying you, as I had to take Mar to a BD party, your aunt ended up having to wait for over 3 hours). By the way, I can not post a lovely photo of you and Ryo smiling from ear to ear, not without his mum’s permission :-)

On the day, Ryo also prepared a couple more experiments to make electricity from other processes, when the judges came round, you both had absolutely nailed it with the explanations, perhaps that’s way you are now through to the next round :-)