It was one of Matt’s classmate's BD, and his mother decided to invite his class to one of the latest laser tag game, there have been at least a couple of these popped up lately after disappearing for the longest time. But once Matt knew where he was going, it was like winning the lottery, haa haa haa.

For me I was a bit... mehhhh, nothing special, but that feeling came about due my past experience, now at least 20 odd years later, the game had improved somewhat, lol. When I was young (haa haa haa, long, long time ago in a galaxy far far away), laser tag was in dingy warehouse, the waiting area would be full of cigarette butts and stale blue haze (smoking was cool then) would hang heavy in the air. The decor was based on one colour palette, black... haa haa haa. Don’t get me wrong, it was fantastically fun, but not really for young children. 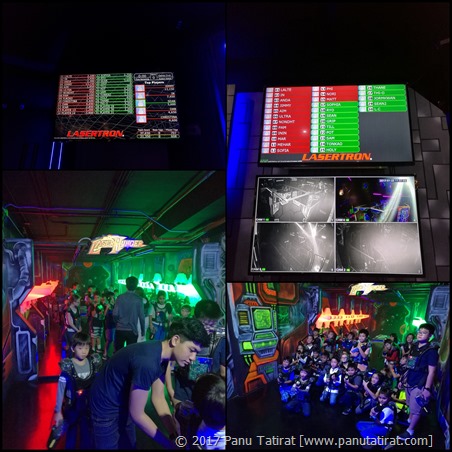 In my mind I knew it wouldn’t be that bad, but what I saw blew me away (the venue was ‘Laser Hunger’), it was clean, high tech and all the equipment worked! Haa haa haa haa haa. When we arrived the game had just started (15 mins per round), so with three guns spared, us three jumped in... As soon as we were on the battleground, Matt disappeared like a sewer rat, blasting left and right as he went (we were reds).

I was really apprehensive because Mar was in tow, but one minute in with the green and red lasers whizzing left and right, it was everybody for themselves, haa haa haa haa haa haa, once I had taught Mar how to use the gun and saw that she could shoot... I was off like another ‘bigger’ sewer rat, disappearing into the darkness... and I was terrible haa haa haa haa haa, If this was a real battle there would be more holes in me than a very holely Swisscheese, haa haa haa.

After the laser game we all moved on to a fantastic lunch and playtime at Matt’s friend home, what an excellent afternoon.