How did I get here? lol.

I had first started donating blood whist I was at Uni., it was something I had wanted to do for the longest time but never really had the opportunity nor the courage, haa haa haa. Well after the first time, I was a very regular doner (every two or three months). 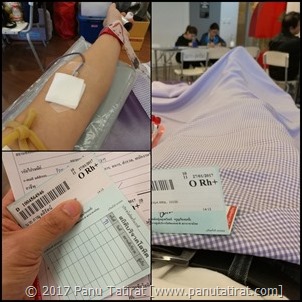 When I came back to BKK, the donation continued, I can’t say exactly when, but for some reasons it stopped. I remembered the last time I’d donated, the nurses informed me that my blood had too much fat (or something) probably caused by donating the blood so soon after breakfast, it probably didn’t help that by choice of breakfast was ‘Kaho Ka Moo’ (directly translated, ‘Rice Leg Pork’), lol.

Let’s say around the time I had stopped becoming a donor, I wasn’t in the best of health, I mean I wasn’t ill, but with the lifestyle I was living surely meant my blood couldn't have been at its best (so it was probably the best that I wasn't donating).

So, right now after putting the effort to eat right for the past 6 months, and regularly exercising I am in much better shape now than I have been for the past (dare I say) 10 years, lol.

Ok, so how did I get here, I was actually at True Tower to pick up a document, but coming out of the elevator I’d turned right instead of left, and found myself looking at a dozen or so field beds, with people populating some of the beds, all serene and peaceful, only a tiny, constant hum of the machines running in the background. It was like a scene from a rather bad horror film, lol.

Of course this is nothing new, blood drive at various office buildings is quite common. So with a little spare time, I'd picked up the very familiar form, filled and submitted to the admin whom were nosed down at his rather ancient notebook. Within about five minutes I was laying on one of the field beds, blood slowly flowing into the bag below.

Walking away totally chuffed at having the chance to be a donor once more.