The previous Rugby World Cup was held during September and October of 2015, don’t worry you two, I am not going to discuss how England was robbed, in truth, plain and simple they were not good enough (sad). I really want to share with you the first match of Pool B, between South Africa (an utter giant in the World of Rugby) and Japan, it was played at Brighton Community Stadium on September 19th 2015. 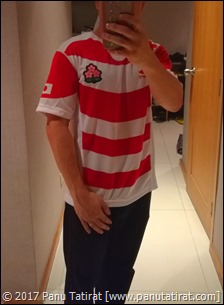 On paper, it was just a formality, everyone had already drawn the conclusion that Japan (who always play with passion and dedication) was going to lose, based on a single game between the two team, the probability of Japan beating South Africa was in the same vein as me beating Mr. Bolt in a sprint.

Personally it was the biggest upset in the history of Rugby World Cup, and it was amazing... since that match 2 years ago (on and off) I have been trying to purchase a Japanese National team jersey without much success, and for a very short period of insanity I was even looking at the option of getting a ‘copy’ version of the jersey, lol.

A few weeks ago, a colleague who literally has been to Japan over 100 times was once again going to Japan, haa haa haa. So she helped to order the jersey, and had it sent to her friend in JP (they do not send overseas) and now a few weeks later I have it in my hands, lol.

The red and white hoops has another connection to my friends and me, it was also the colour of our House Kit, which for me continues to be puzzling even after three decades, our house was ‘Darks’, and yet our house colour was Red and White hoops, haa haa haa.

Email ThisBlogThis!Share to TwitterShare to FacebookShare to Pinterest
by Panu at 21:58
Labels: Fun, Jersey, Me, Rugby