What a whirlwind of a Christmas day lol.

I was getting worried as Crimbo day was approaching fast, for some reasons there were so many things to do on Crimbo day, and it had nothing exactly to do with Christmas, lol. Officially Christmas doesn’t exist in Thailand, the 25th is just another working day. But with today's globally mixed culture, and your mother being Catholic, 25th of December means quite a bit in our household and to some extent in Thailand.

Luckily this year, 25th of December fell on a Sunday (no need to take leave, lol). Normally you two are up and about pretty early anyway, but on Crimbo day you two were up even before the moon went to bed, lol.

Is there a better start to a brand new day than to wake up, and seeing a pile of presents, all waiting to be opened, haa haa haa. Suddenly I was seeing 2 cartoon Tasmanian Devils whirling about the presents, small pieces of wrapping paper flying out in all directions from a cloud of smoke, haa haa haa.

Among all the presents, the real walkie talkie was by far the most favoured, Father Christmas (wink wink) for some reasons thought that you two would need these prior to the long drive tomorrow, lol. Eavesdropping on the local security guards team was fun for a while, lol, but I had a purpose for these but it will have to wait until the holiday.

But at first we had to set our own handle, Matt wanted to call himself 'Sponge Bob', at first Mar had chosen 'Pony', then (obviously) it was later changed to 'Elsa'. Your mother was 'Pretty', lol, for me, this was most difficult, at first it was 'handsome' to follow your mother's direction, but that was such an exaggeration I just had to change it, eventually it was transformed to 'Photo' (still don't like it).

Anyway, we had a long and busy day ahead, all the packing still had to be done, this time we were going to be away for almost a week, the longest time being away for all of us, just imagine all the dresses we had to pack for Mar, lol. Then your mother will have to attend the late King's funeral (more than greatly honoured, see the previous post 'Greatly Honoured'). 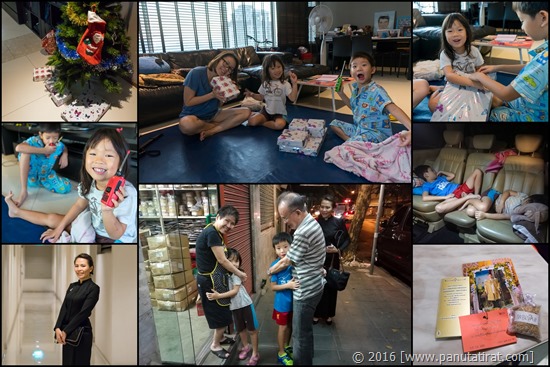 Dropping off your mother was another tense affair, your mother had to be at the meeting place (this is a proper, extremely strict affair) at precisely 16:00, although she would not be ushered onto the temple's ground until 19:00. For the normal people like you and I, one can start queuing as early as 03:00.

I was in my of panicking mode, as firstly we had left it quite late before leaving our apartment, and today of all days, we should not be late, lol. Secondly I had decided to blindly trust Google Map, haa haa haa, and at the first intersection, I would have turned right but Uncle G told me to turn left, and thus soon finding myself on some unfamiliar roads. Sweat was starting to pour down my face and suddenly after an unfamiliar left turn we were about 700 metres from where your mother needed to be and with plenty of spare time. However the road was blocked, the only option was for your mother to jump out (continue on motorcycle taxi, actually there are volunteers who would provide a ride for free around the temple area because of the late King's funeral, the amount of people arriving each day is totally incredible, even till today) and us three went on our way.

Can you guess where we went? Haa haa haa, of course when I find myself alone and having to look after you two the only port of call would be... my parents place, lol. But this time I came prepared, in a bag next to me were your pajamas and toiletries because I had no idea when your mother would finish. By the time you were fed, washed and changed it had gone past 20:00 and not long after your mother arrived, tired but very contented.

By the time we got home, both of you were in lala-land, and it was impossible for your mother to carry Mar whilst wearing her special dress, so I had to do a couple of trips, and oh boy, you two are getting heavy. Worst of all, we still haven't finished packing, haa haa haa.

It was a long but a wonderful day, and even a longer night, just a perfect day before our holiday begins tomorrow.