Haa haa haa haa, because I’d vowed not to make the same mistake as when Mar had her singing event, then not having my main camera in hand was ever so difficult, so when it was time for the end of year Christmas concert, where Matt was a participating, I took the whole kit. 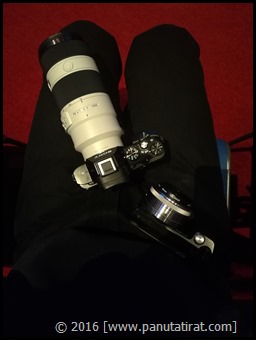 Knowing the environment that  you are going to be in helps ever so much in taking better photos, and I knew the main auditorium well, well enough to know where to sit and what lens to have in hand. Obviously the 70 - 200 f4 on the A7 and the wider 16mm (24mm effective) on the Nex 5.

On the main stage itself, there were easily at least 100+ students, all bright eyed and ready to sing their heart out. At first I’d thought it was going to be difficult to find Matt in that crowd, but it really wasn’t, lol.

Matt was next to his best friend, Sofia, who is probably the tallest one in her year, so it literally took 3 seconds to pick the two of them out in a sea of students. Unfortunately the two of them were at the very back of the stage, if you two were anywhere further back you would have been in the Chao Phraya river, lol, and now I was at least a good 7 - 8 metres too far back... haa haa haa.

Managed to capture a few good shots, but I was too far away to make it interesting, haa haa haa, will be better next year :-)

A few sections stood out in my mind, the 12 days of (Thai) Christmas was brilliant, the acapela song was fantastic, but the most fun of all was the ‘Frozen’ section. As I was sitting away from our group, auntie Tip, auntie Ward, your mother and Mar were all here, I’d thought that Mar would have been over joyed to hear the Frozen songs sung live on stage, and it was beautiful.

When I’d came out after the concert, what did I see? Mar fast asleep, apparently she had slept just a moment before the ‘Frozen’ piece, lol.