Last Thursday I was off again, a three and a half hour flight was going to take me somewhere out East (and a little North, lol). Only seven days earlier I was also at the same airport, but that time was heading West (but not too far), and a few weeks before that I was also here going to another place. 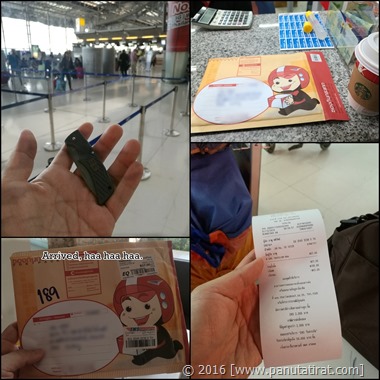 I must have been in some trance that morning, the routine I was in, was to get ready for the 9 to 5 instead of being in the ‘flight’ mode. So my pocket knife was carefully slipped into my jeans pocket without a second thought.

After checking in at the airport, I was searching for my little fountain pen that lives in my jeans watch pocket, but instead I’d reached a little too far and to my surprise found my little knife, I told you I was totally zoned out, lol.

But what to do? First thought, put it into the loaded luggage, but I didn’t have any loaded luggage. Throw it away, the cost of the knife was literally insignificant, but that would in a way submit to my carelessness (with a handful of stupidity thrown into the mix, lol), so there was no way I was going to throw it away. Next thought was to give it away to one of many guards walking around, but I’d quickly shy away from that idea.

I was stumped for a sec, then without a second thought asked the lady at the check in counter if there was a post office near by, totally expecting her to say, are you crazy why would there be a post office in the middle of Thailand’s main International Airport.

Then she pointed me to the furthest corner of the check-in floor, lol. Oh man, I had never expected there to be a post office at the airport let alone on the check-in floor, and it was super busy too! Including the envelope, it was 49 THB, haa haa haa.

The silly thing was, the day after I was back in BKK I was surprised to see someone had sent me a package… haa haa haa.