By now you should know that your father is a bit of a ‘one thing’ man, a pair of trainers, a pair of work shoes, single colour jeans (black), a watch for work, and an old beat up watch for the weekend, the only thing I have several of, are pens, don’t really know why, and we don’t write that much anymore, haa haa haa.

Now the watch, oh, I have nice watches in my time (Breitling and so on), but none of them hit the spot, until I’d discovered Casio, haa haa haa haa haa, much to your grandparents dismay. It is the Swiss Army knife of watches, why have a boring dual functions equipment (if you have date and day, then the watch becomes a 4 functions equipment, Time, Stopwatch (just use the second hands), Day and Date).

Actually may I add another function, ‘decoration’, haa haa haa, there are some gorgeous designs out there, but it literally costs more than a house, lol. So for the longest time I wore a Casio ProTrek, it was perfect, affordable enough for my very clumsy wrist, runs on sunlight, waterproof, compass, altimeter, barometer, it even let me know what mood your mother is in at any time of the day, haa haa haa (oh I wish).

Then when that watch became too beat up for work (together with your grandmother’s continuous comments) it became my weekend watch and another classier ProTrek took its place, haa haa haa.

But now even the beat up weekend watch is becoming too beaten up (so I was told), haa haa haa, so my weekday watch became my weekend watch, meaning a new opening for the weekday watch... being boring me, my first and only choice was Casio.

It must have been destiny, just as I was looking around, Samsung launched the Gear S3, never ever thought I would have a smartwatch, who would need a phone watch? Haa haa haa, apparently I did, that is the second most used function on my watch (the first being using it to tell time, lol). I’ve found myself talking through the watch more times than I would like to admit, and of course looking absolutely ridiculous whilst talking, but it just came naturally, people called, I would look at the watch and pick up the call with a flick of a finger, the voice quality was good enough even for a business discussion, it is great. 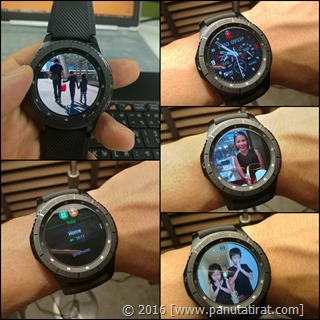 Not mentioning all the fidgety things you can do with it, this thing is just super, super fun. The first thing I did during the very easy setup phase was to turn off everything, the vibrate, most of the sound, the step counter, the heart beat monitor, turned down the brightness and even turned off the gesture wakeup.

Now after about a week, I don’t think I’ll ever go back to a normal watch, imagine in a few years when it runs on solar power, and becoming properly waterproof at deeper depth, please just add a compass then it would be just perfect, haa haa haa, I am just having far too much fun.

Of course one of the main concern was the battery life, I mean for me if it lasts more than a day all should be fine, lol. Of course since this is the 3rd iteration, the battery supposed to last over 2 days (under reasonable use), and for me, I guess I am super duper reasonable, because I barely use 15% of the battery each day.

Yesterday from Aliexpress came the screen protection for the watch, super fidgety to put on though, lol, and all I am waiting for now is the new strap, the watch uses the normal 22mm strap, so virtually all straps with 22mm will fit. The strap that came with the watch was black, and after looking around on the web the white one looks rather dashy, haa haa haa, and as always it will look ridiculous on me, well it is too late now, haa haa haa.