Finally, finally and finally, your mother took a photo of me that I didn't have to put it through twenty layers of filters that would have been cranked up to the maximum, and then having my finger hovering over the 'send' button while going back and forth in my mind whether to post it or not, haa haa haa.

This one didn't even spent two seconds on Snapseed, lol. So where were we going, actually where we were returning from should have been the question :-)

It was a very lazy Saturday (if it was up to me everyday would be 'lazy', lol), as usual you two were up before the sun awoke and then decided that your mother and I should also be up too, that alone made the rest of Saturday a 'lazy' day, your mother and I almost stretched it to a 'lazy' week but the nine to five got in the way, haa haa haa.

So instead of cooking breakfast at home, we took brekkie at D&D, and once again we ordered far too much! The multi layered pancake, stuffed with several strips of bacon between the layers, interlaced with jam (that we'd opted out), and hiding in between one of the layer was a fried egg, then on top of it all sat another beautifully cooked fried egg. 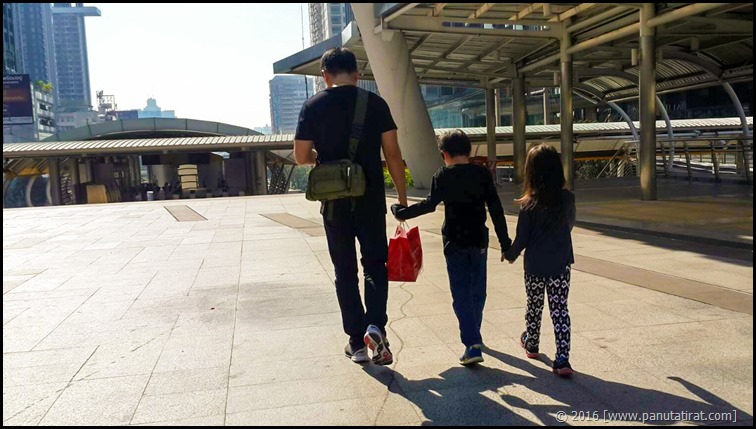 That dish alone was for Mar, which was a mistake, in my mind all the components came separately, you know pancakes, strips of bacon, syrup, eggs and so on, separated on a plate, rather than being stacked up higher than mount Fuji, haa haa haa, and Mar didn't even come close to finishing... oh well, there went my diet.

So the photo was of us walking back, and me working out how much calories I had consumed, and then I was sad... haa haa haa, in one meal I had already consumed my day’s quota of calories, haa haa haa.