Krabi Day 4: What a great day

Where to start, today will turn out to be an amazing rollercoaster of a day! As soon as I woke up, and with a skip and a funny hop, then drew opened the curtains, and found myself staring at a piercing bright blue sky, ‘hooo Raaayyy’, the boat trip is going to be amazing.

This morning was glorious, we took breakfast in the sunshine, you two ate really well and we were making good time for a 09:00 start. Then I went to the loo, how can the sky went from sunshine to thunderous sky in a matter of 15 minutes!

The signs were not encouraging, the wind was strong, even the sun had on a thick anorak and a big woolly hat,  the rain was relentless, by that point I had resigned and was only worried about one thing, how to get the money back, haa haa haa.

The next mile stone was at 10:00, the trip was supposed to take around 4 hours, so if we’d left at 10:00 we can be back by 14:00, plenty of time to pack, check out and drive to the airport. So 10:00 came, the sky opened a little and the Sun took a peek. There was no turning back, the organiser said it was a go, but we had to be driven to a nearby pier rather than getting on the boat at the beach behind the hotel. 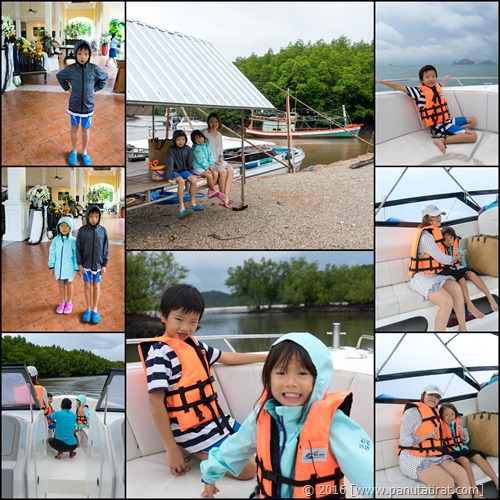 There were 2 speed boats leaving that day, the other group was 10 Australians which your mother suspect were from the ‘Leisure’ industry (don’t even look at me for any explanation), and they took more beer with them than ten 7/11s had in stock. By this time I was a bit miffed, the weather was still shit#y, and the car was late in picking us up, the clock was ticking...

Finally the car arrived, and took us only a few minutes to a very nearby local harbour, where we saw this speed boat in waiting, and we were told to get in it, ‘Great’, but then we were told to get out, as it was for the Australians... ‘What’... lol.

So the beer loaded boat shot off, leaving us behind, in the rain with no boat in sight, a long few minutes went, your mother could feel that I was getting a little agitated, so she picked up the phone to call the organiser just then our car returned with our provisions (food and so on) together with our guide, things were looking up.

It was obvious that they had forgotten us, and no boat was booked, but they took care of that quickly enough, so after the provisions were loaded, we were off, if we had boarded the boat on the beach, the trip would have taken 15 minutes, but now it will take 30 minutes to Hong Islands.

The speed boat was super fun, bumping over waves after waves, then suddenly we were told to move from the bow to the stern and be under roof, the bump got much bigger to the point that the captain put on his really battered red helmet, haa haa haa haa haa, I have not seen you two and your mother laughed so hard. All in all the boat crew consisted of 2, the captain and his first mate and then there was 1 hotel staff who took fantastic care of us (Khun Ake).

I don’t remember all the names of the beaches nor the lagoon we had visited, lol, sorry, so let's just call the first beach we visited ‘first beach’, haa haa haa. Right, the first beach was glorious, the wind had died down, and the sun was out! The beach was clean and there weren’t too many people, best of all were all the fishes, swimming freely with no care in the world. 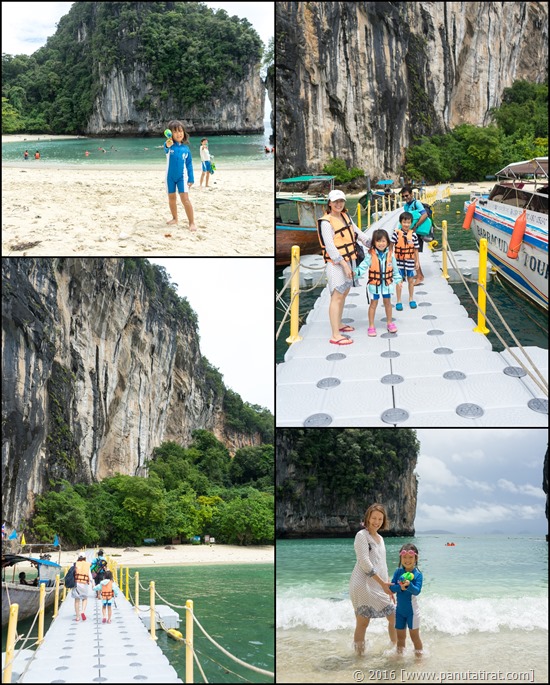 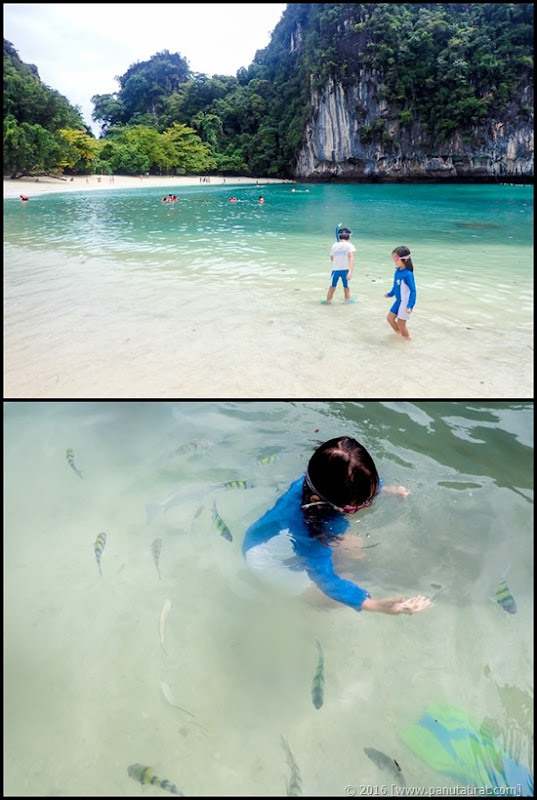 Ake had everything to make us more than comfortable, now I understood why it took so long to prepare and load all the provisions onto the boat, lol. On the first beach, after we’d chosen where to sit, suddenly Ake produced a huge floor mat, endless supply of drinks, masks & fins, towels and a kitchen sink (not really). Of course once everything was set up, I’d decided to move (sorry), so everyone pitched in and moved to a much better spot. 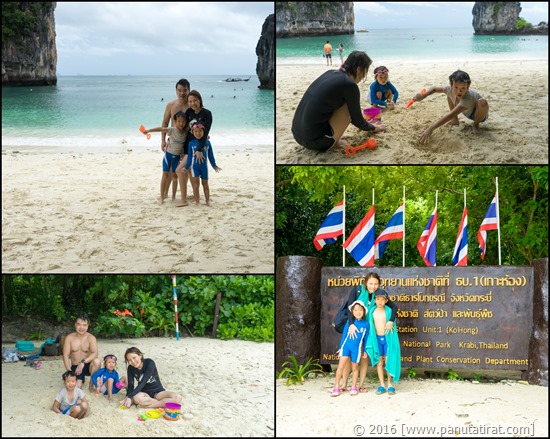 Ake said there was a clown fish about 15 metres from the beach, so Matt and Mar all jacketed up (I don’t think that is a real word, lol), led by Ake into the sea. I was foolish for not taking the mask and snorkel but instead decided to use my tiny goggles. The sea was not at its clearest, but, oh man, there were hundreds of fish! The small goggles were very restrictive, so I gave up and went back to pick up the mask and snorkel, and wow, it was like the whole sea opened up, fantastic.

Mar got bored with the sea pretty quickly, it was much more fun to play with the waves and sand, lol. Matt was like a little merman, but after a very long while, even with the jacket he was totally worn out. When you two had enough (with some coercing, lol) it was time to move, I think it was almost noon when we found ourselves back on the boat, just as well the weather was closing in once more. 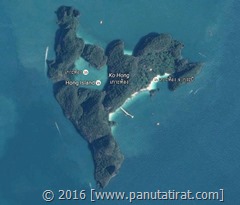 Just as we entered into the lagoon, the rain began, very lightly at first and to tell the truth it was quite refreshing, then the wind picked up, it was like being in a horror film. In a matter of minutes, it went from sunshine and calm sea, to a full blown typhoon with intoxicating dark clouds, the captain said it was the ‘head’ of the storm and it won’t last long. I didn’t believe him (and he was right). 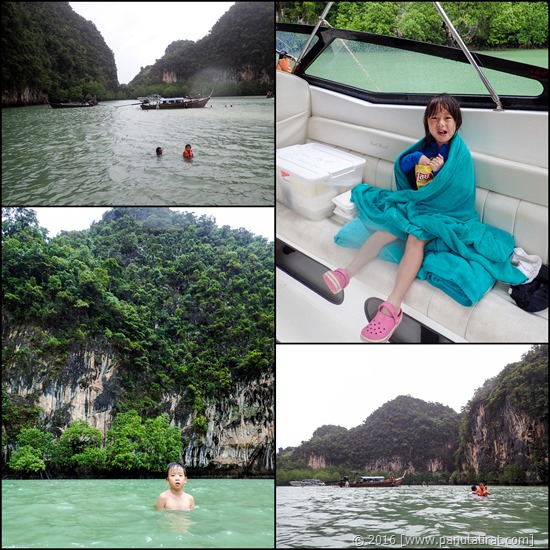 Even being in the lagoon, the captain and his first mate had a good fight to keep the boat steady against the maddening winds and waves, two anchors were dropped (bow and stern). Matt and Mar were wrapped up with all the towels we had, and beneath that their rain jacket and hat. I still thought that was not enough. It was frightening, the winds kept getting stronger and stronger, the rain was whipping all of us, left, right even sideways, haa haa haa, all of us were soaked... the captain once again put on his red helmet, haa haa haa, despite everything, we all can’t help but laugh.

We could see outside the lagoon, and the boats out there had also anchored down, but they were in much, much worse position than us. 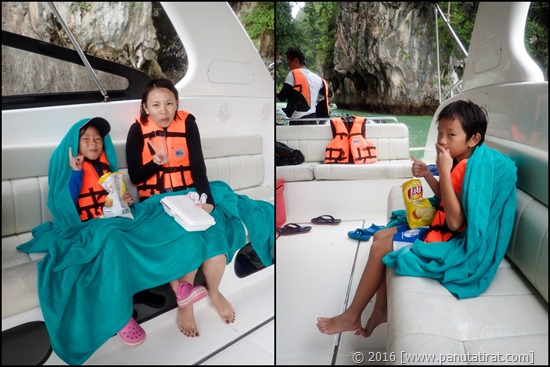 The water was warm, we were surrounded 360 degrees by beautiful cliffs, it was wonderful. Matt decided to make a VDO, don’t forget to ask me to show it to you, lol.

When it was safe we headed out to another beach for lunch, it was probably close to 13:30 by then. So to the ‘second beach’ we arrived, haa haa haa, still have no idea on the name. I was expecting to take our simple lunch on the boat, but I could not have been more wrong.

Lunch was taken on the beach with the cliff as our roof, we had white table cloth, proper chairs, proper food (albeit a tad cold, haa haa haa), proper glasses, salads, a full range of beverages and so on, it was rather grand to say the least, and topped up with a full large tray of all kind of fruits. We didn’t gorge ourselves, quite the opposite we ate quite little, you two just wanted to play. 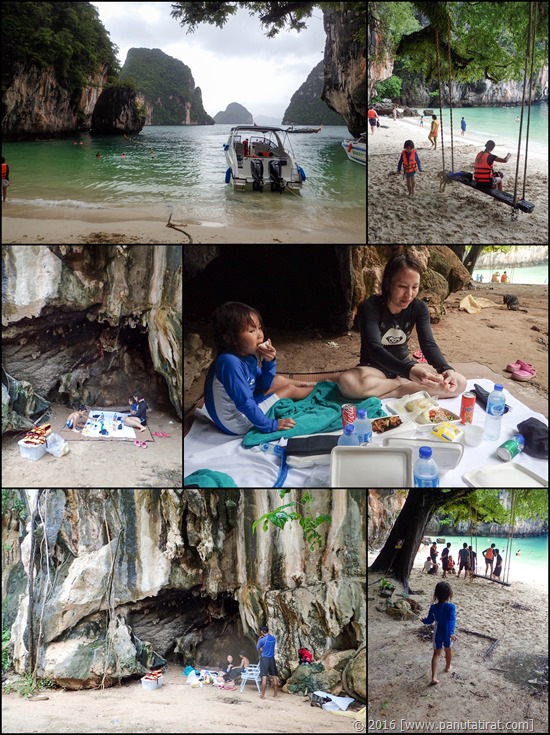 We could have stayed for longer, but it was almost 15:00, and there was so much more to do. We made the decision to go back, luckily the sky opened up meaning the captain could now take us right up the beach just behind the hotel, it was perfect. We said our goodbyes to the team, tears falling freely, hugs after hugs, vicious hand shakings, haa haa haa, not really.

6. Packing at the speed of light.

Once back in our room, I have never packed so fast, of course we still had to fill up and return the rental car, our flight was supposed to depart at around 19:20, and time wise it was looking tight. Matt was brilliant in finding a petrol station virtually next to the airport.

After all the semi-rush, the plan was delayed by almost an hour, haa haa haa, and what a strange airport. We had to checked in our luggage in at Terminal Two, which was the international terminal, however, we had to board the plane from Terminal One... haa haa haa.

7. See you again Krabi, you were fantastic.

As we were about to land, Matt decided to fall asleep, Mar of course were fast asleep as soon we had taken off, haa haa haa. I was scratching my head a little wondering how to manage all the bags, a huge luggage and 2 sleeping children, lol. There was no other choice I had to wake up Matt, and it was real sporty of him not to lose his temper but instead was more than willing to carry the bags, thank you. 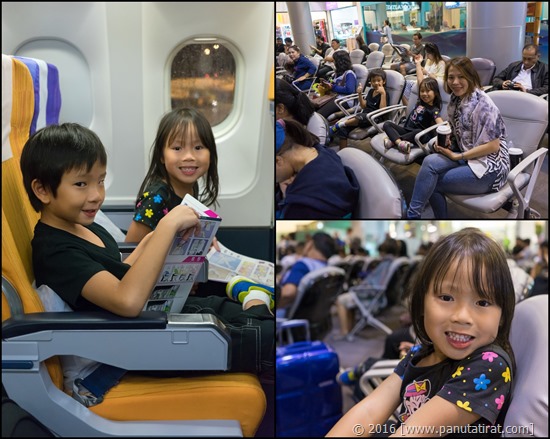 Well the only thing stopping all the bags flying off the oval conveyer belt was Chuck Norris thick metal wall. So that poor small luggage came down the incline as fast as a meteor, and the first part to hit the Norris wall was one of its wheel, which promptly flew off like a bullet ricocheting off a metal wall. All the people nearby just looked at each other, not a sound was uttered, Matt and I looked at each other in disbelief, our attention now focused on picking up our huge luggage before it hit the Norris wall, haa haa haa.

It was lucky we had decided to leave the car at the airport’s carpark, imagine having to find a taxi at that time and with all the bags and luggage and Mar fast asleep, haa haa haa. It was hard to belief that earlier on the same day, all of us were swimming among the fishes, haa haa haa, it was a brilliant short holiday, thank you Mama.