All the finger crossing didn’t work, haa haa haa, the sky was as grey as Spitting Image’s John Major, and it was leaking rather heavily too. Instead of leaving at 09:00, it was moved to 10:00, just as well our brekkie was running rather long, lol.

10:00 came and gone, and our feet were still firmly on the ground, haa, not long after the organiser called to postpone the trip to tomorrow, the only problem was we were to depart home tomorrow. But the flight was in the evening, so our last chance was to hope for a clear sky tomorrow morning.
To the Emerald Pool we go :-).

Now that our plan had been thrown out of the window, what to do? Luckily you two wanted to visit Kid’s club (again), well that kept you busy for about an hour, then your mother came to the rescue once again :-). At first I was a bit apprehensive because your mother was suggesting we visit Emerald Pool, and that was almost an hour drive away and more importantly it was near lunch time. However, I came round rather quickly, so off we went. Along the way we drove past some other attractions, the hot spring and the Fossil Shell Beach, but our focus was strong, drove on we did.

In a jiffy our car was neatly parked, and off we went, of course being single minded to the matter of self destruction, I headed towards the few restaurants I saw, found the best one and ordered quickly. Only to find out a moment later that just around the corner there were a billion more places that we could have chosen, note to self ‘survey the ground first’, oh I do keep forgetting my ninja training, haa haa haa. 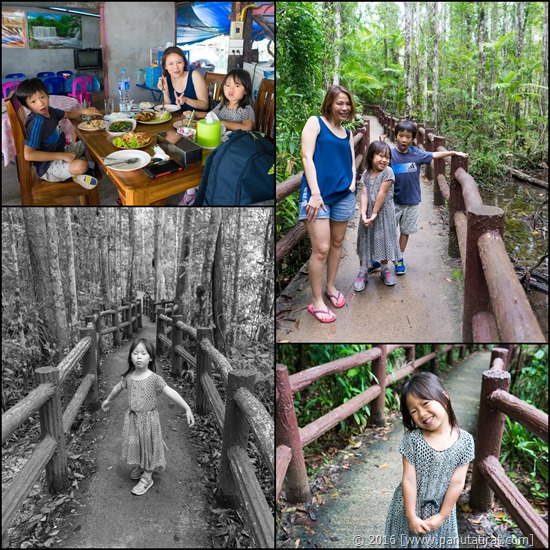 To actually get to the pool, we had to walk along the small concrete platform cutting and winding, literally through the jungle like ribbon being thrown across a room, your mother and Matt surged on ahead, leaving the princess and I to leisurely stroll, taking photos and singing songs... haa haa haa. 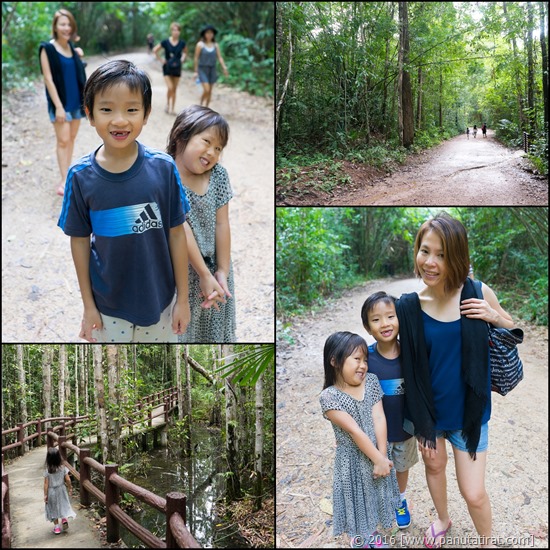 By the time Mar and I arrived at the pool, I can see Mar getting super excited, the green pool was enticing, the floor was super slippery so each step was taken with more care than handling the finest china. But where was Matt and your mother? The pool itself wasn’t big and after walking around it a few times with no sign of your mother, I was beginning to sweat, lol, with no other option Mar and I headed back to the roofed structured meeting area, where with relief I saw your mother and Matt (all changed for a swim) walking toward us.

Your mother drew the short straw, and had to sacrifice herself from all the fun and sat by the bags, all the things she does for all of us :-). 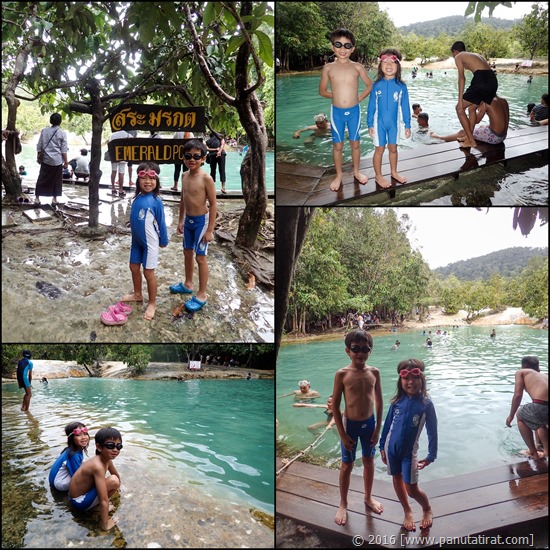 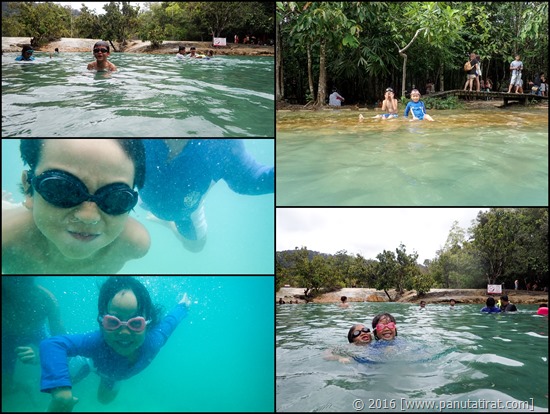 It was like swimming in a irregular shaped pool, with yucky sand and mud for floor, the green but somewhat clean, cool water was refreshing. The endless stream of new water from the mountain was the key, the best part were the fishes and the most slippery algae covered rock ledges around the entire pool, that was super fun and almost impossible to get out (much to your amusement), lol, you two had to physically pull me out more than once, lol. 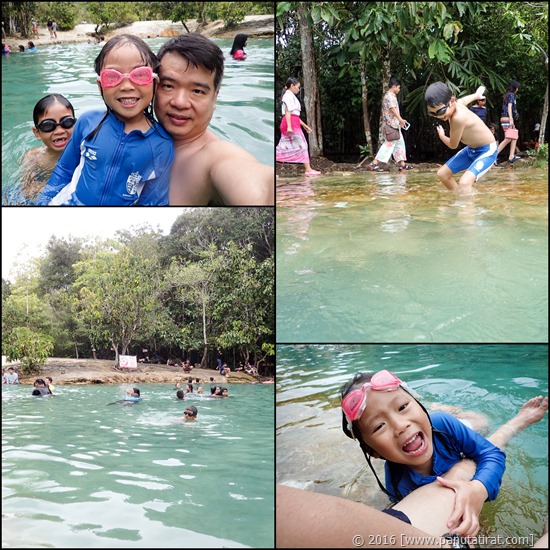 After a quick wash, which I suspect, was probably the same water from the pool, lol, was super cold. By now you two were as clean as a brand new nappy, so off we went to the next stop, we just weren't sure where that was yet, lol.
A little too hot, lol.

There were a couple of hot springs dotted long our drive back, so we'd just picked a road sign and followed it, but it didn't turn out what I had expected.

In the past, hot springs were basically a natural fountain flowing into a pool of super hot water, surrounded by trees and general nature. There would be eggs sellers paddling eggs for you to boil in the hot spring via a long stick with a basket at the end, there would be egg shells and rubbish everywhere and the most memorable thing of all was the strong stinky Sulphur smell that hung heavily in the air, as a child I never knew if that was from all the eggs or the fountain, lol.

The hot spring we were about to enter was literally a resort, how time had changed, instead of nature, we were greeted with a small entrance fee and a beautifully paved walkway accompanied on both sides with beautiful flowers and even some spattered sculpture, it was cleaner than our living room, lol. 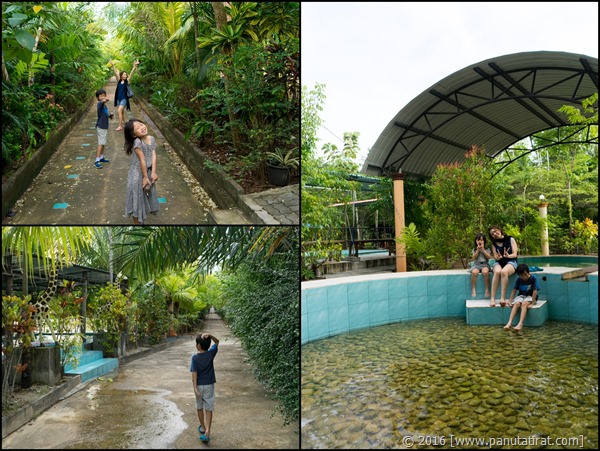 Inside this huge grounds were several small size swimming pool (all not exactly the same size, and some were under roof), some were filled to the brim and some were filled only to one’s ankles of hot spring water. In short it was like a small resort, several people were already there enjoying the hot water in their t-shirt, shorts and some in swimming gear (how hygienic that was). Of course Matt wanted to jump in regardless, haa haa haa, for me the water was far too hot, there were various warning signs of not spending more than 10 minutes in the pool. There was no way we were going to let Matt jump into any of the pool, after some serious negotiations, you three spent some time wading in the hot water, and that was already uncomfortable enough, lol.

Time was passing fast, but there was always time for ice-cream, lol, and off we went again to the fossil shell beach. But unfortunately whilst we were driving to that beach the sun was getting really sleepy and your mother found out that the beach was already closed, haa haa haa, just as well.

Without anything else on the card, so off to supper we went :-) to another famous restaurant in the town ‘Poo Dum’ (‘Crab Black’ being the direct translation), a more traditional restaurant, with great food and fantastic staff, so another fantastic supper now behind us, lol. Then walking just around the corner, was a roti shop… wow… your mother never could resist a good roti soaked in super sweet condensed milk. You two should have seen your faces at the first taste of roti and condensed milk… utterly blissful, lol. Please remember this though, sugar is bad, terrible, it will destroy your life, treat it as a drug, avoid it as much as you can. 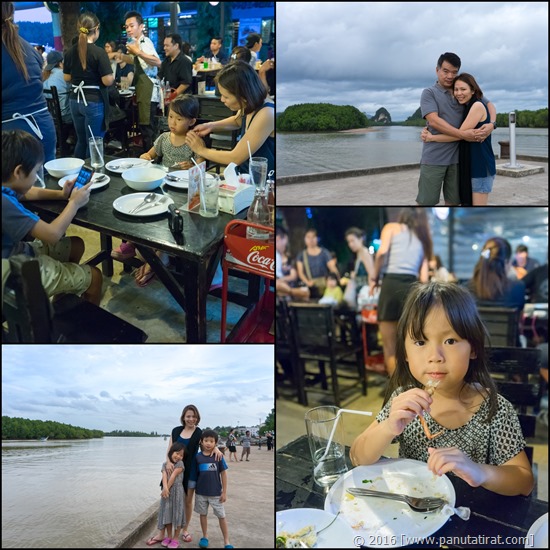 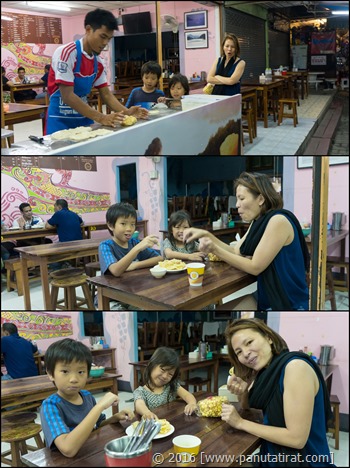 Driving home took around 25 minutes, Mar was out literally by the fifth minute, lol. It turned out to be an absolutely fantastic day, can’t wait until tomorrow for the speed boat trip and the journey home.