Your half term break was supposed to have started on the 15th, but due to the most sorrowful event, it was brought a day early to Friday the 14th. Even before half term starts Mar kept asking if ‘tomorrow’ was the holiday, haa haa haa.

Eventually, it was the actual ‘holiday’, lol, but you two had a few days before the trip to Krabi, your aunt was brilliant at keeping you two busy during those few days. On the 20th of October, I was up at 04:30 finishing the packing that was started the night before, whilst your mother and you two were fast asleep, lol. 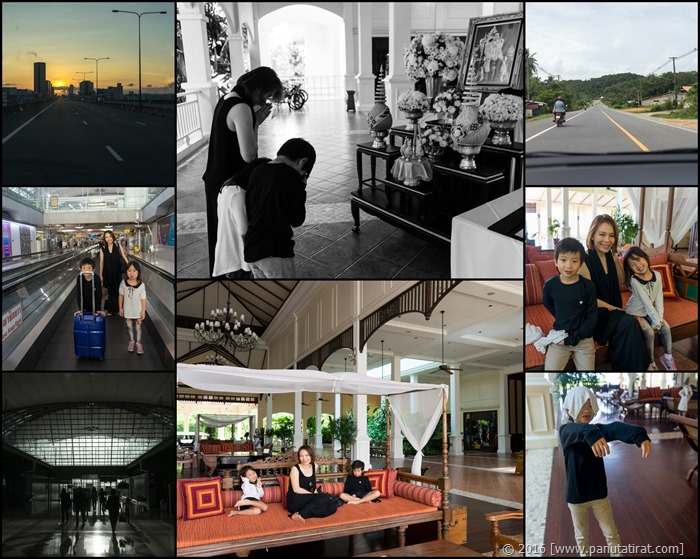 The queue was over flowing out onto the road, the clock was ticking, time was running out. As soon as I had cleared the entrance gate, the plan of action was to drop you two (and your mother) off at the connecting bridge to go and check in, whilst I try at ‘Top Gear’ speed to find a parking space.

Even dropping you off was almost comical, lol, with me blocking the entrance to the walkway (because there was a car ahead of us) so people with their trolley was queuing, the van’s door wouldn’t open for your mother (one of you had once again flick the child safety mechanism), it was a farce, but eventually you three were off (don’t worry, the walkway was blocked off less than a minute, to be honest if it was any longer there would have been a lynching on my fat head), lol.

By some miracle I’d managed to find a parking space without much hassle then I ran, and ran just like a little ‘fat’ gingerbread man, haa haa haa, Suvarnabhumi is quite a large place, lol, and I didn’t have a clue where I should be running to, haa haa haa.

Eventually we made it onto the plane and finally sailing through the air, Matt was wondering where was his monitor, haa haa haa haa haa. We’d landed around 09:00 (ish), leaving your mother and Mar to pick up the suitcase, whilst Matt and I rushed to Sixt to pick up the car rental. Everything was rather smooth (for once), by 09:45 ish we were all bombing down the road heading to Sofitel. 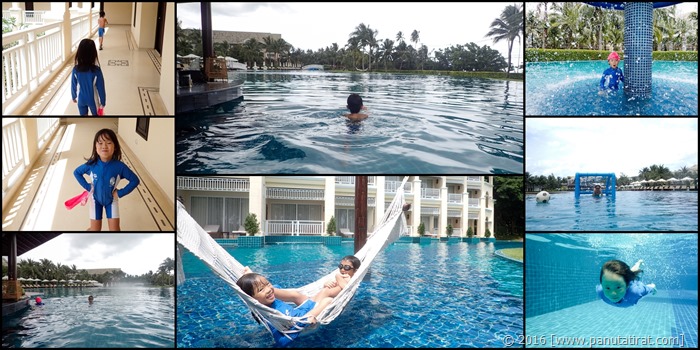 For once we had plenty of time of our hands, it wasn’t even 13:00 when you two and I were in the pool, and this pool was amazing! By far the biggest pool I have ever seen in person, it stretches across the whole width of the hotel (and more), wandering around, it never seem to end. I really like the hotel, firstly because this was the low season the huge hotel was virtually ‘The Overlook Hotel’, consequently the staff were very attentive.

Came late afternoon, your mother and I was adamant on not taking supper at the hotel, our hotel (I think) sits on Klong Muang Beach, not much (actually not at all) in terms of retail or restaurants, only a few scattered hotels. The main beach in Krabi was Ao Nang, less than 25 minutes away by car, so off we went.

The drive was great, through twisty tarmac roads, winding between steep green mountains of course never seen in BKK. Ao Nang, Ao Nang, you might as well call it Shambhala, we got to it alright, but finding a place to park proved to have been impossible, so instead of a walk we’d decided to head to a restaurant near Ao Nang.

By that time, the sky had dimmed, the car air conditioning was perfect, the slow swaying from side to side as I steer around the twisty roads, together with the very early morning start, a solid afternoon swim, all made for the perfect ‘sleeping’ storm, lol. By the time we pulled up to the restaurant, you two were in full sleeping mode. What to do, do we wake you up and eat? Do we drive back to the hotel? The task of waking you two up, then coercing you to eat when you are half asleep was just too much work, so we drove home, lol, as there was no way you were going to wake up so your mother and I were greatly looking forward to a quiet night... errrmmm ‘no’.

Carrying all the bags, whilst your mother carried Mar and I carried Matt, must have been a fantastic sight, haa haa haa, and would you believe it, as soon as we closed the room’s door you two became all bright eyed and bushy tail! :-) luckily it didn’t take much to lull you two back to sleep.

Couldn’t have hoped for a better first day.