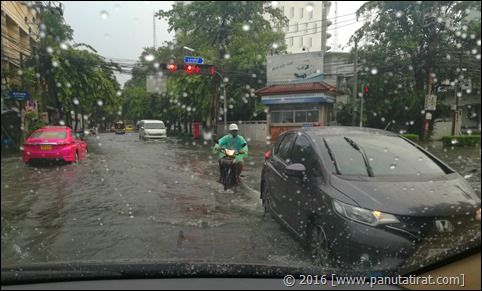 I have no idea if the infrastructure will improve over time, or will you two be still seeing the same thing that you are seeing here. This photo was a few weeks back and admittedly the rain was rather heavy, but the duration was rather short, no more than 30 minutes, and yet the roads became shallow (in some cases, quite deep) canals, lol.

Matt was delighted, and wanting to jump in, Mar (being a princess) decided to watch from afar, lol. For us adults, when it rains this heavily we know at an instant which roads to avoid, like a built in map in our frontal lobe, lol.

You two should look up the great flood of Bangkok back in 2011, a friend had to hire a boat and rowed into the second floor of his house, it may sound totally ridiculous and funny to you, but at that time it was truly sad and very frightening, some people lost their most important possessions some even lost their lives. The flood hit badly the province of Ayuthaya (old capital of Thailand) where several important factories meters deep in water, hurting their business, thus hurting the Thai’s economy and worst of all hurting the workers.

Last night we saw one of the worst wind and rain to hit BKK, to me probably the heaviest we have had so far in 2016, there is a saying in Thai, ‘Plai Fon, Ton Nhao’ (Tail end of the rain, beginning of the cold), I hope the cold spell lasts longer than 4 days this time :-).