This week was the week (2nd Aug.) where for the first time Matt will be spending time away from home all by himself, lol, the camp he will be joining is ‘Self Discovery Camp’, and to be very honest your mother and I were ever so worried! Matt will be away for 5 days and 4 nights, your mother had of course packed enough clothes for a century, haa haa haa. 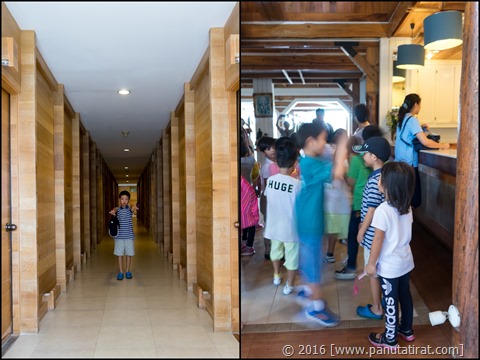 The camp starts on the Tuesday, there was a pickup point at the outskirt (north) of Bangkok, however your mother wanted me to drop you off at the camp itself, of course I’d comply, haa haa haa. So after applying for leave, us three took off on Tuesday morning, aiming to arrive at the camp by eleven (your mother had to work, so it was only the three of us).

Driving there was a bit of a laugh, apart from losing my way (a little, lol) we did arrive on time (Bonanza Resort), but the bus hadn’t turned up which made me glad, as I really wanted time to take a good look around before the rest of the gang shows up.

Close to 12:00 the bus arrived with the majority of the children, and then it was time for Mar and I to leave, but I didn’t, actually Mar and I stayed behind just for me to observed how you got on with the rest of the children, of course you took to it like fish to water... haa haa haa.

Then it was only Mar and I, and I had everything planned out to the millisecond, haa haa haa. First stop was Bonanza zoo, I can not express how I hate (small) zoo like this, low budget, low maintenance and low on thoughtfulness. But Mar being only 4 loves the zoos, especially the feeding part, lol, well as soon as you are older we must have a talk on this, lol. 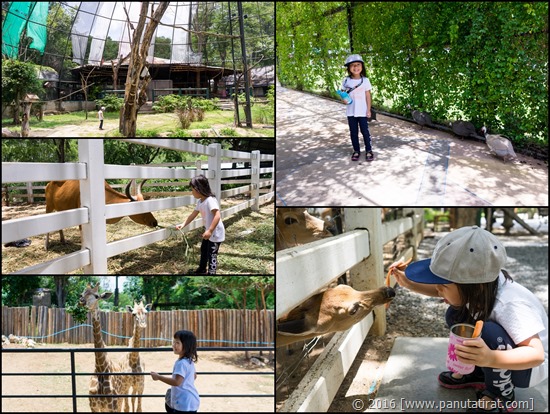 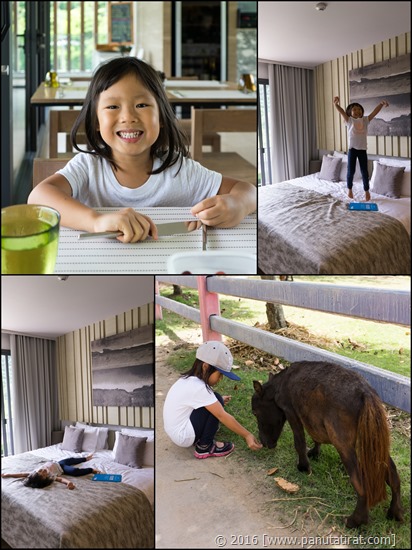 A couple of hours was enough, then it was time to check in to the nearby hotel (Escape), which was only 20 minutes away, the rest of the day was spent swimming :-) Supper came quite late, trying to keep Mar awake whilst driving to supper was tough, lol. 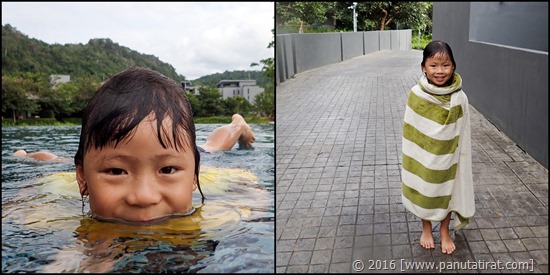 Wednesday morning, started off with (of course) breakfast and a swim followed by checking out, then a quick drive to Chokchai farm, Mar had been moaning to get back to feeding the sheep and the cow again, lol. Unfortunately (much to my delight) because it was during the week, the tour of the farm was limited to 10:00 and 14:00 only, so we spent most of the time on the small petting pen outside the farm, and Mar could not have been more happy (feeding cow, sheep and riding on a pony). With more time to kill, we took a tour at the museum... haa haa haa, it was interesting... ;-) Soon it was time for lunch and a long drive home :-) Your mother counted the days to the weekend, haa haa haa, we were told to arrive at 10:00 on the Saturday morning and I could see that your mother was more than eager to get going, haa haa haa. She was slightly cross though when I’d lost my way a little, lol.

Instead of picking up the children in the normal way, all the parents were led into a darkened room where the children were meditating (eyes closed), we’d all tried our best not to make a sound, finally all parents were in front of their child (their eyes were still tightly closed, listening to story from the narrator).

Once the story (about endless love of parents for their children) ended, all the children were told to open their eyes... haa haa haa, some of the children cried, some gasp and laugh, Matt was a mixed between the two, haa haa haa, but your mother was definitely bawling her eyes out, lol. 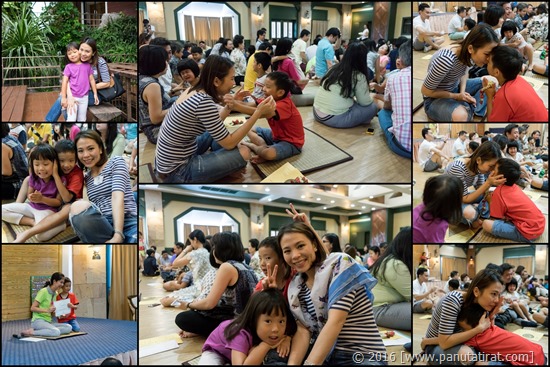 The first thing we noticed was Matt’s hair, it was totally sticky... even though he said he had washed it everyday... of course only to be found out later that he was washing his hair with soap, lol. Mar on the other hand was just plain happy to be going to a ‘holiday’ (meaning hotel) again.

One of the parent who was picking up her child, has a son in Mar’s class, so it was a great surprise for all of us, only to found out that a bunch of Mar’s friends were there too. There was no other option, we gladly joined them for lunch, and it was the best lunch ever! Imagine around 20 very young children and 10 adults having lunch in a quiet restaurant... well it wasn’t quiet when we were there, haa haa haa. 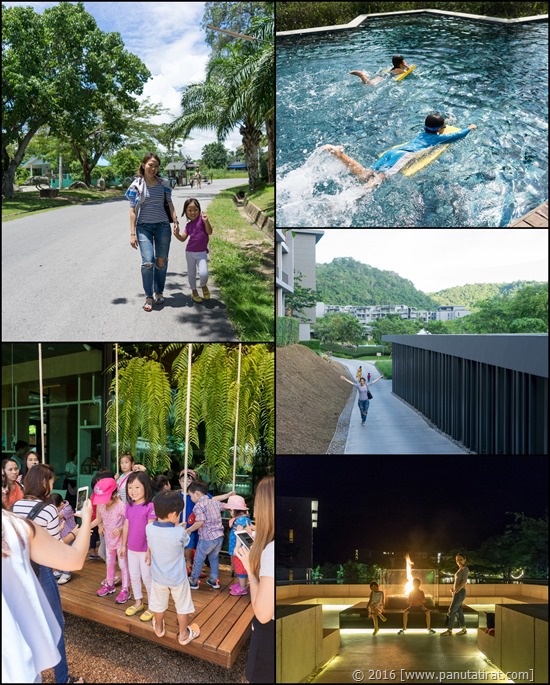 After the best lunch ever, we parted way and went back to Escape, this time your mother had upgraded to the pool villa instead of the room Mar and I had previously, you two could not have a bigger smile on your faces, to see that shimmering pool, lol. 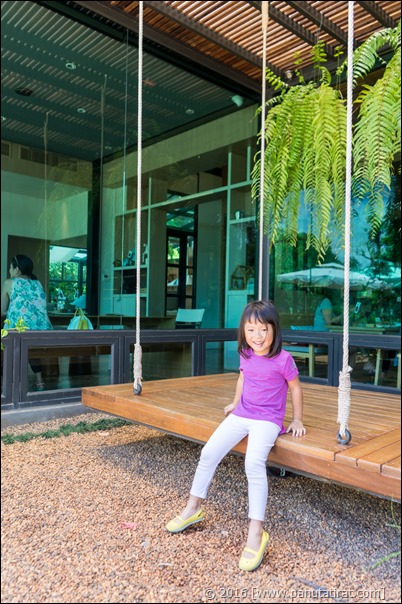 The rest of the day was nothing but swimming... On the following day, after breakfast we all headed to Mhor Por farm, more horse riding and more feeding things... haa haa haa, then is was time to head home. We needed to arrive at my parents house before 16:00, so that your mother and I could take part in the important referendum on whether to accept the update constitution, and we made it with 15 minutes to spare :-). 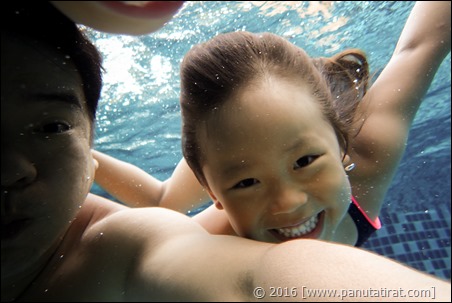 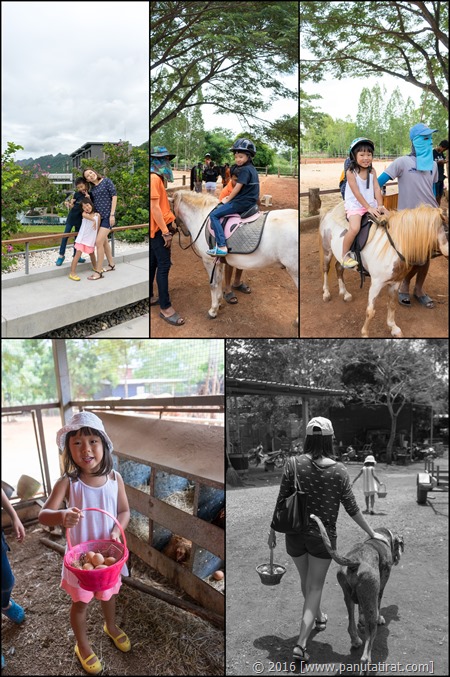